US Navy robot war-jet refuels in air: But Mav and Iceman are going down fighting

Aviators plan to keep carrier drones on the sidelines 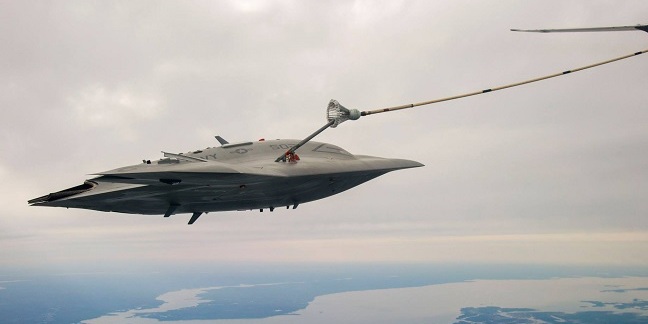 A US Navy X-47B unmanned aircraft demonstrator has successfully carried out air-to-air refuelling from a tanker, the last of the feats the X-47B project was intended to accomplish. The two robot jets will now be retired, either to museums or the Pentagon's famous desert aircraft boneyard in Arizona.

The test took place yesterday off the coast of Maryland. X-47B "Salty Dog 502" successfully plugged into a contractor-operated tanker aircraft, demonstrating that an unmanned, tailless aeroplane with a stealthy shape can not only take off and land on an aircraft carrier but also refuel while airborne.

It had already been shown that un-piloted aircraft can refuel air-to-air but it wasn't known if a robotic combat-worthy carrier-based machine could do it too.

The original X-47B contract was awarded to Northrop Grumman back in 2004 by DARPA, alongside a similar land-based effort, the X-45. The US Air Force declined to proceed with the X-45 but the Navy eventually decided to carry the X-47B forward.

When the X-47B was first rolled out, Captain Martin Deppe of the US Navy said "The X-47B will demonstrate how unmanned combat aircraft can operate from aircraft carriers [...] extending the carrier's reach and power projection from anywhere in the world."

The X-47B had previously demonstrated that it could take off from - and, more significantly - land on an aircraft carrier at sea. Such arrested landings have long been regarded as one of the most difficult and dangerous feats for human pilots to master. US naval aviators tend to measure their manhood (or, these days, womanhood) by the number of "traps" in their logbook.

The X-47B has now also successfully demonstrated its autonomous air-to-air refuelling capabilities, another vital trick which human pilots find quite difficult. The Register understands that the act of flying the probe of the to-be-fuelled aircraft into the basket trailing at the end of the tanker's hose is traditionally described as being of similar difficulty to "taking a running fuck at a rolling doughnut". (The same metaphor was gently satirised with soft romantic music in Pablo Ferro's famous opening to Stanley Kubrick's classic Dr Strangelove.)

The US Navy will now ground the two X-47B "Salty Dogs", and either donate them to museums or mothball them at the Aerospace Maintenance and Regeneration Group ("the boneyard") at Davis Monthan Air Force Base in Arizona. The service takes the view that its future Unmanned Carrier-Launched Airborne Surveillance and Strike (UCLASS) war robots will be sufficiently different from the X-47Bs that there's no point in keeping them flying.

It's generally thought that only intervention from outside the Navy kept the Salty Dogs flying this long, as the service left to itself would have retired them without doing the air-to-air refuelling trials. It appears that the Navy doesn't want the UCLASS to be suitable for carrying out long-range strike missions; rather, the service intends to restrict its role and use it mainly as a way of letting a carrier do flight-deck operations for only 12 hours a day rather than 24. (It's hard to sleep aboard an aircraft carrier when flight-deck operations are going on.)

There's a lot of waffle, but the real reason for the Navy's plan is that strike missions are far and away the likeliest real-world combat employment for US carrier jets. Strike is, ultimately, the reason the USA has carriers and their accompanying groups of surface-escort warships. If UCLASS can do strike as well as manned jets can, that will mean much less work - and almost no real-world combat work - for US Navy aviators, who are strongly represented among the service's admirals.

The aircrew don't want to be sidelined and (in time) eliminated altogether, it's that simple. In the USAF, with aircrew culture even more dominant, the X-45 wasn't even allowed to get started. The Navy has probably only allowed the X-47B to get this far due to worries over its carriers' vulnerability and its air wings' current lack of stealth aircraft.

The truth of the matter is that most of military aviation could have been automated long ago. As a practical matter, indeed, strike missions into airspace that is actually dangerous have already been largely automated: the suppression of Libyan air defences in 2011 was carried out almost entirely by Tomahawk cruise missiles. A Tomahawk is an autonomous robotic strike jet already - it's just restricted to one-way kamikaze missions. And indeed, re-usable robots have also already shown that they can contribute to the contest for control of the skies.

It's pretty plain from outside the aviator-culture bubble that for maximum value for money and minimum risk, unmanned is the way to go. But most of the people who make spending decisions live inside that bubble, and aviators have been successfully resisting automation for a very long time now. They may well hold it off for some time yet. ®

Pics Neat bit of kit, and all the UK needs now is the cash to (re)buy it

Whose drone is that? DJI unveils UAV traffic tracking system