Qumulo gets fat appliance alongside skinny fast one

Qumulo – the start-up building a better-than-Isilon scale-out NAS and staffed by Isilon vets – has launched a capacity-focused hardware product to complement its fast skinny one.

The QC208 appliance is optimised for capacity, being a 4U enclosure running commodity hardware in a 4-node cluster design. Per-node it has 208TB of raw HDD capacity – 26 x 8TB HDD – and 2.6TB of raw SSD capacity per node – 13 x 200GB eMLC SSD – all hot-swappable.

That means 832TB across the 4 nodes and to scale out, just add more nodes, with connectivity ports being 40GbitE QSFP+.

The nodes run Qumulo Core, deliverable as a software-only product running on hybrid flash/disk commodity hardware, dedicated appliances or in virtual machines. It uses the the Qumulo Scalable File System (QSFS) and is said to be data-aware.

Qumulo Core provides real-time analytics to curate and manage data. Qumulo says this will “help businesses obtain instant answers about their data footprint by explaining usage patterns and which users or workloads are impacting their performance and capacity“. 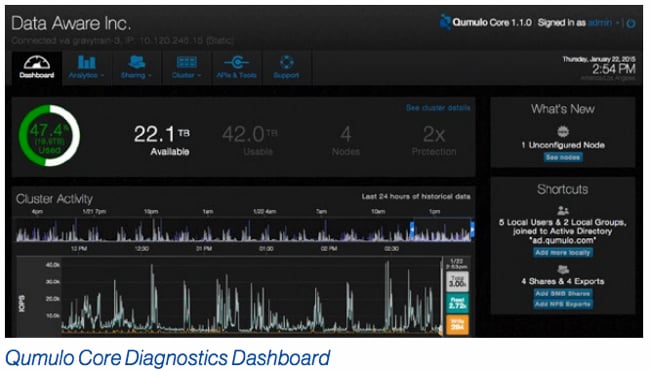 Now Qumulo has both performance and capacity nodes and we can expect its software to be energetically developed, with the company saying its storage can be used more efficiently than alternatives because of its real-time analytics.