Australia mulls dumping the .com from .com.au – so you can bake URLs like chocolate.gate.au

NZ and UK tried it, and they're still standing

Australia may ditch the .com in .com.au and offer citizens straight .au domain names following increased competition from the explosion of dot-word addresses.

A discussion paper [PDF] published by the .AU Domain Administration (AuDA) puts forward the case for making the aforementioned change. It notes that while it has considered such a tweak in the past, New Zealand and the United Kingdom's decision to offer *.nz and *.uk addresses – such as theregister.uk – may mean that now is the time to follow suit.

At the moment, Australia follows what used to be the industry standard: a series of second-level domains used to differentiate different groups, eg: example.com.au for a business, school.edu.au for an educational establishment. There are seven in total, the rest being: net, org, gov, asn and id.

But following the release of hundreds of new dot-words, like .book and .ping, and a halving of the growth rate in .au domains from 12 per cent in 2012 to just 6 per cent in 2014, AuDA is revisiting the idea of offering pure .au domains.

There are a significant number of countries that have already gone this path, including Canada (.ca), China (.cn), Colombia (.co), Guatemala (.gt), Japan (.jp), Korea (.kr), Mexico (.mx), Peru (.pe), Singapore (.sg), Uruguay (.uy) and others. But it is to New Zealand (.nz) and the United Kingdom (.uk) that Australia is looking most closely because they not only run similar systems and approaches, but also have a high level of existing registrations – running into the millions of names – which makes a big change all the more complicated.

"The decision of .uk and .nz to open up their domain spaces continues an international trend in this direction," the paper notes.

"There is an argument for saying that .au should keep up with its peers, and if other ccTLDs have successfully managed the transition to direct registrations then there is no reason why we could not do the same. However, the Panel is clear that merely taking an 'everyone else is doing it so why don't we?' approach without properly evaluating the benefits and risks of change would not be a responsible way forward."

In truth, such a process is often complex and time consuming. New Zealand went through a year-long consultation process to shift to selling direct .nz names, which included numerous papers, meetings and a range of alternative solutions to get there.

The end result appears to have been successful: the chief executive of .nz Registry Service Jay Daley told The Register today that there "has certainly been an uptick," with the registry now growing at 15 per cent, and that the ability to register a second-level domain has proved "very popular."

The process the .uk registry operator Nominet went through was far more painful, however, with a near revolt by its members accusing the board of a "blatant money grab," plus an aggressive annual general meeting, and even the forced expulsion of critics from a consultation meeting.

In the end, and following a number of compromises, the board eventually passed the plan.

Since so many country-code top-level domains have moved from a three-level structure to a two-level structure, there is plenty of precedent and experience to figure out how to do it right.

AuDA has indicated it is likely to follow .nz and .uk in granting "priority rights" to existing owners of "com.au" domains, ie: if you own example.com.au you have first dibs on example.au for some period of time.

In the case of the .uk registry, nearly 95 per cent of domains were under .co.uk so it was a relatively simple process, although it still caused some problems. One being what to do if someone owns, for example, flowers.org.uk and another person owns flowers.me.uk – who gets to own flowers.uk? The original plan would have given the flowers.uk address to whomever had registered the first flowers.*.uk domain, but that had to be scrapped.

There are some differences. You don’t need to be a resident of the UK to register a .uk domain but you do have to live in Australia (or have a registered Australian office) to get a .au domain.

As you can see from the chart below, most moves to second-level domains have given precedence to the oldest registered domain first, then to any existing domains and then occasionally to trademarked names. The only exception is when governments are given first dibs – as happened in Korea, Saudi Arabia, and Uruguay.

If you're interested in learning more or making your voice heard on whether Australia should make the shift, you can read the paper [PDF] and then either email AuDA's chief of operations or fill in an online survey.

The consultation will be open until 1 June. ® 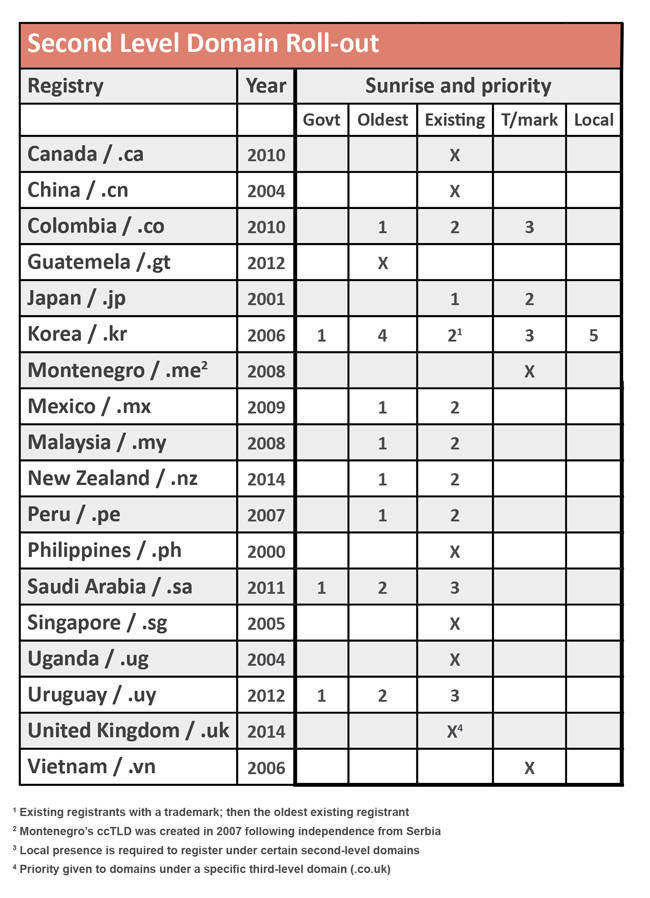