Did Larry nearly curl up with billionaire biz baron? 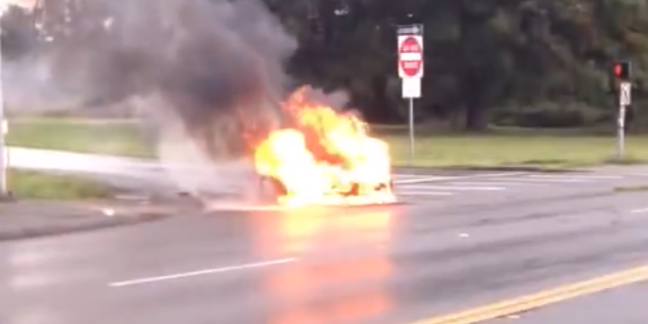 The tech world's favourite car-maker, Tesla, came so close to the edge in 2013 that its boss Elon Musk nearly offloaded it to Google, according to a new book documenting the company's history.

According to Bloomberg, the upcoming Elon Musk: Tesla, SpaceX, and the Quest for a Fantastic Future fleshes out what in 2013 was only a rumour.

A few weeks before it declared its first quarterly profit in May 2013, according to author and Vulture alumnus Ashlee Vance, Tesla was so close to bankruptcy that Elon Musk discussed selling the company to Google with Larry Page.

The Bloomberg excerpt claims that the company was “struggling to turn preorders of its vehicles into actual sales”, partly because of the daunting engineering challenge it had set itself, to try and deliver something that matched the experienced luxury builders.

With some features missing from the earliest vehicles, and trouble getting top-tier suppliers to deliver kit, Musk told Vance the Model S's word-of-mouth “sucked”, and Musk set to work on a last-ditch and ultimately-successful recovery plan.

However, he must have been worried: by March 2013, “so many people were deferring orders” that he paused factory operations and approached Page.

The deal would have been staggering, if the report is accurate: US$6 billion for the company plus a commitment to another US$5 billion for capex, to expand the factories.

The deal, which Vance says Musk and Page shook on and had lawyers working on, didn't happen: a frenzy of calls to close sales worked, and a former Daimler executive Jerome Guillen was fixing both the bugs in the cars and shortcomings in the company's repair network.

Page declined to discuss the deal with Vance, saying merely that a “car company is pretty far from what Google knows.” ®

In your face short sellers! Tesla goes two quarters in a row without losing money

A supercharged 2020 ahead? Or is the Electric Emperor a little short on threads?