BEND OVER, boy! Twitter lockdown to give trolls and bullies a good LICKING

New abuse policies turn the ad platform into a classroom

Twitter has gone into full headmaster mode in an effort to cut down on trolling and harassment among its users, generally acknowledged to be rife.

A day after it announced that anyone can send you direct messages if you opt in, thus opening the door to harassment, Twitter has come up with several "upgrades" to its system.

"We believe that users must feel safe on Twitter in order to fully express themselves," its director of product management Shreyas Doshi blogged. "The ultimate goal is to ensure that Twitter is a safe place for the widest possible range of perspectives."

To that end, we now have:

Twitter has extended its definition of violent threats to include "threats of violence against others or promoting violence against others." While it has always been against Twitter's rules to make "direct, specific threats of violence," now if you are one of the crowd gathered around the fight, egging them on, you too will be in violation. In other words, you are all going to be dragged into the classroom whether or not you were the ones fighting, and you are going to get a good telling off.

If you have been naughty, Twitter will now be able to suspend your account for some period of time. The screen grab Twitter stuck on its blog post had a timeout of 10 hours 58 minutes – which implies a 12 or 24-hour suspension. It does not indicate whether you will be told you should sit down and think about how your actions hurt others.

Users can be obliged to delete certain tweets before they are allowed back into their accounts.

Likewise, if someone has posted what Twitter decides are tweets that have broken its policies, it may force you to verify your telephone number before you are allowed back in to your account so it knows who you are and presumably can contact your parents/police/etc.

Twitter will extend its "quality filter" service that it makes available to celebrities and other blue-tick verified tweeters to cut down on abuse. Dubbed a "troll finder" by some, the idea is that it will identify troublemakers and limit their reach across the Twitter network. 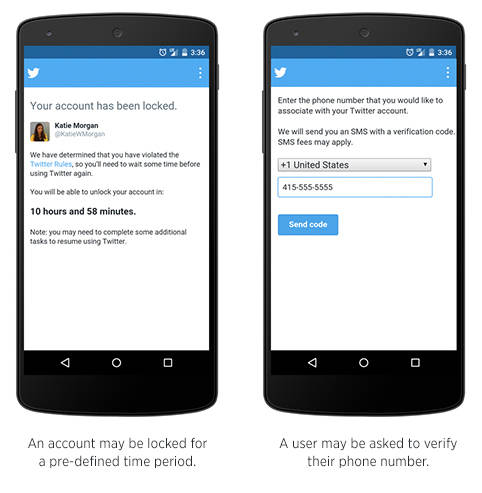 Twitter said it is planning to monitor the changes to see if they help reduce the level of abuse on the service, something that has been reaching Tinder levels of creepiness recently. If they don't help, we have some additional ideas…

Force a Twitter user to write a heartfelt direct message to someone who has complained about them before they are allowed to play outside.

Force users to retype and retweet the company's anti-abuse policies.

Force naughty Twitter kids to read and comment on all tweets from a specific user (such as Kim Kardashian or Justin Bieber) until they learn their lesson. Or their eyes start to bleed. ®