When the Schmidt hits The Man: Look what the NSA made Google do 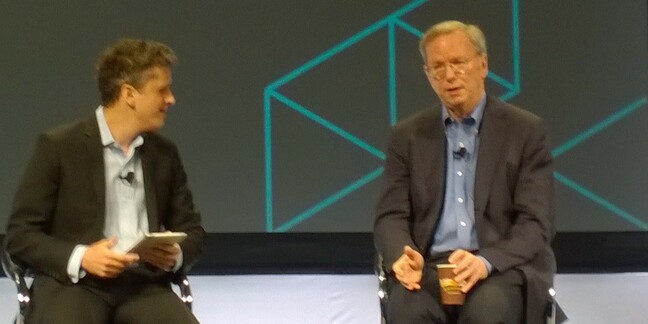 BoxDEV In an interview at the BoxDEV developer event in San Francisco today, Google executive chairman Eric Schmidt said end-to-end encryption for services like Google's is the solution to mass online government surveillance.

"What do you think of the state of cyber security in the USA today?" Box CEO Aaron Levie asked Schmidt during an onstage talk at BoxDEV on Wednesday.

"When the Snowden revelations came out, we were very upset," Schmidt answered. "It was not in collaboration with us. NSA stands for 'Never Say Anything,' and they didn't say anything to us. We embarked on a programme to fully encrypt and secure the information that customers entrust with us. That means encryption at rest and encryption in transit. We know that it worked because now all the people who were snooping are complaining.

"Randomly watching and surveilling what's going over the internet and invading the privacy of American citizens is not OK. Encryption is the solution."

Should Google be allowed to gather all this personal data? File that under questions not asked. Google is a data company, though, and it's counting on its ability to analyze data intelligently for its future strategy. Asked what the Mountain View Chocolate Factory is focused on, Schmidt said artificial intelligence is at the forefront.

Schmidt also spoke about the future of enterprise software, which he said will be further transformed by cloud and mobile.

"In the future, the entire world will be defined by a smartphone or tablet – Android or Apple – a very fast networking connection, and cloud computing," he said. "Almost all the enterprise software that you use does not meet most of those criteria."

In a jibe at companies like Oracle and Microsoft, he added, "The existing incumbent products and companies, they rename themselves as cloud computing but they are not really doing it."

Schmidt insisted that only two mobile platforms matter, saying, "Again, on the smartphone side, Android and iPhone."

Also according to Schmidt, the idea of business networks is obsolete. "This artificial distinction between consumers and businesses eventually goes away," he said. "It used to be that there was this model that enterprises consisted of firewalls and the CIO was in charge of this and nothing else. The older model was predicated on segregation of networks. That model is not correct any more. People do things at home, in the office, on their mobile device, and that segregation is not needed any more.

"Look at the numbers in the enterprise business. 90 to 95 per cent of the money is going to traditional and legacy architectures. The remainder is going to web services and cloud services – a little bit to Microsoft, it's nice of me to say that. The amount of money going to the older model is huge. Someone is going to come along and figure out how to build a cloud computing framework that really works for enterprises. Google is a part of it, but we're not going to be the only player." ®