RSA 2015 Almost every Java-hacking black hat is now popping Adobe Flash, after Microsoft's hard-line patch policy made it harder to target software such as Java.

“2014 saw a shift from a balanced targeting of Java and Flash to over 90 per cent focus on Flash,” the team told delegates to RSA San Francisco last week. “The drop in Java exploits corresponds to a new Internet Explorer feature which blocks the use of out-of-date Java.”

Now the battle to build Flashy hacks is heating up. Five of eight new exploits worked into exploit kits last year targeted Adobe, while three of those five were exploited within 10 days of public vulnerability disclosure.

Microsoft will not say whether it plans to block un-patched Flash installations, however, telling El Reg it does not comment on future functionality. 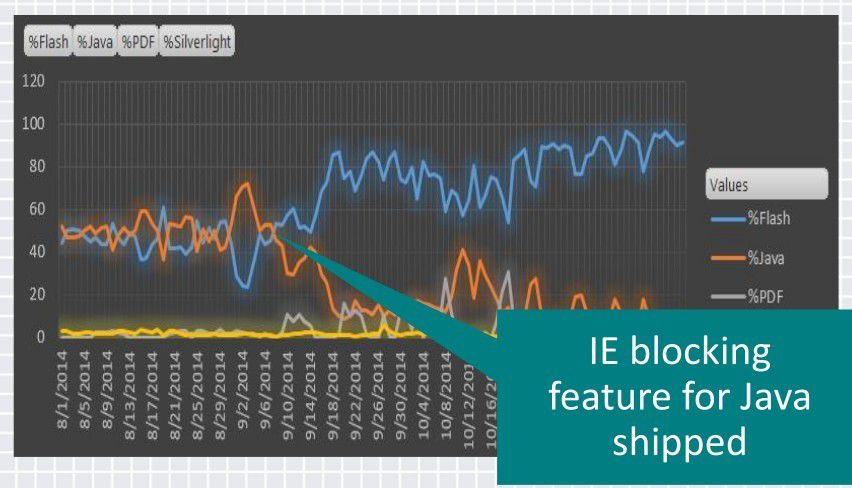 Almost all Windows 8.1 users run updated Flash installations; the pain is most acute for Windows 7 users, of which about 20 per cent have failed to patch.

“There has been increased usage of Microsoft Update and Windows Update services over the years... a decline of more than 70 per cent in the total number of remote code execution vulnerabilities that were exploited in Microsoft products between 2010 and 2014... fewer exploitable vulnerabilities, [and] new security mitigations,” Rains says.

Microsoft's brain trust bleats that its five Internet Explorer defences have seriously degraded the ability of black hats to crack the browser, with six exploits in 2014 being reduced to two after the hardening was switched on. The defences covered use-after-free, two Windows optional updates and its Java patch policy.

Both remote code execution holes and zero-day vulnerabilities have fallen since 2010, making the latter flaws account for a larger percentage of total bugs.

Almost all RCE attacks over the last two years have used return oriented programming and abandoned stack corruption, the latter dropping from 54.2 per cent of RCE in 2007 to nothing last year.

Rains says this is due to Redmond in 2006 killing off known vulnerable functions, particularly buffer overruns, by deprecating a subset of the C runtime library.

“At first, this requirement was simply articulated in the form of a list of bad APIs, but it changed over time to become a header file (Banned.h), that could be used in conjunction with a compiler to help provide an automated method of sanitising source code. This became a requirement in the Microsoft Security Development Lifecycle, which developers at Microsoft use to develop software.

Two other factors that could also be contributing to this decline are the increasing prevalence of exploit mitigations for stack corruption issues (such as /GS and SafeSEH) and the increasing effectiveness of static analysis tools designed to detect such vulnerabilities."

The team's slide deck can be downloaded online [PDF].