Review No, this isn’t the first Apple Watch review you’ve seen. Cupertino supplied review units to a few selected journalists at the start of April; the rest of us had to order our own. I almost ignored mine arriving because I was looking out for a watch. It came in a box more suitable for a truncheon.

No, we're not going to do unboxing on El Reg – this is the closest you're going to get

For all the subtlety of the “look at me, I’m special!” messaging, the box might as well have contained an actual bludgeon.

You get different, cube-shaped packaging with the mid-priced stainless steel Apple Watch, simply called Watch (from £479). If you order the gold Edition, from £8,000, I presume it comes in a coach pulled by unicorns – but I don’t really care. I went for the Watch Sport, in the 42mm size (£339) because I wanted to see if it felt like a compromise.

It doesn’t. The build quality – what Jony Ive likes to call “fit and finish” – is impeccable. All the materials are top-notch and every molecule is in its place. If I had to pick nits, the compound curve where the case accommodates the knurled knob, or Digital Crown, is not quite convincingly resolved, and the cut edge could have done with a chamfer. That chamfer would be on a scale dwarfed by an actual nit. 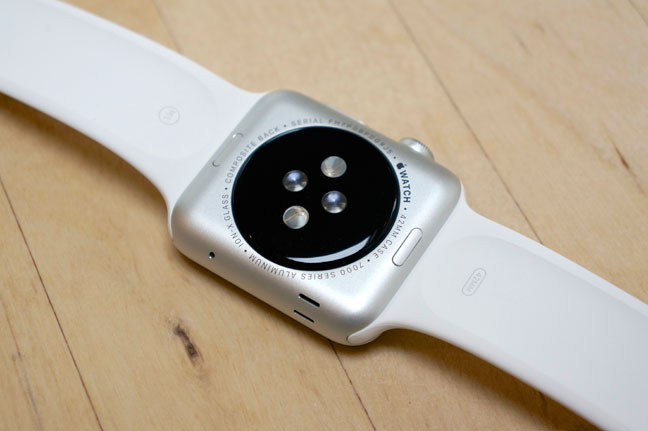 The disc-shaped rear panel houses the heart rate monitor, an optical sensor that sits against your wrist and measures blood flow through the vessels in your arm. The buttons at the top and bottom release the strap, which you can swap for any of Apple’s other 42mm options

The circular back panel, housing the four optical sensors for the heart monitor, is the most expensive-looking feature. It’s ceramic on the other models, plastic on the Sport, but you’d never know. Nor is it obvious that the Sport’s front glass is ionically hardened silicate rather than sapphire.

Both glass and case will eventually pick up scuffs, but there are no corners to get chipped or paint finishes to rub off, so I’d guess the Watch will age gracefully. Physically, that is; technically, I'd give it a couple of years before unsupported software updates put a dent in it. I worried more about wearing it while frying chicken, though, than I would have worried about a conventional watch in the same situation. It seems too perfect to risk.

Here’s the Watch compared to an iPhone 6. The Watch is noticeably thicker, but it doesn’t feel or look unusually chunky to wear, although the back panel does stick out slightly, meaning the watch itself sits slightly off your arm

If you order the Sport Band two lengths are included. Other straps vary, and each is specific to the 38mm or 42mm version. Only certain combinations are sold: for example, you can’t get the silver Sport Watch with a black Sports Band. You can order other straps separately but you can’t order the Watch with none. I’ll be putting up with white for now, despite a couple of “1970s sci-fi” comments, and looking at the emerging third-party straps.

Smart watches tend to be big, even clownishly so. The 42mm Apple Watch felt just right on my middle-sized wrist. You’d only need to consider the 38mm if you’re a smaller person or prefer a small watch. (The sizes aren’t marketed as “men’s” and “women’s”) The case is fairly thick, but neither feels nor looks it; I was pleasantly surprised by this. Although the rounded design can seem bulbous in pictures, the real thing is discreetly elegant. 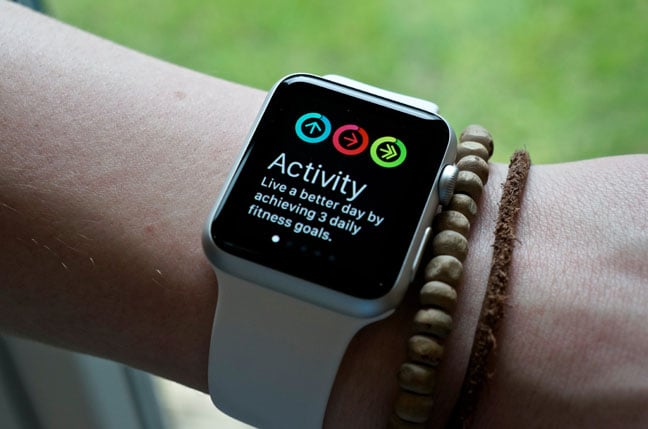 Apple is keen that the Watch should help you stay fit by standing, moving and exercising. It tracks your activity throughout the day and gives you periodic nudges to check your progress or get up and about. A separate Workout app estimates the calories burned by a variety of timed activities

The screen isn’t edge-to-edge, but the black margin blends in, making the compromise less conspicuous than, say, the dead segment of the Motorola 360. What strikes you is the sharpness of the display. To make sure you notice, the first screen after setup animates hundreds of swirling particles; it’s vertiginous, like staring at the Pleiades. The clock faces feature tiny precision markings. Everything is crisp and smooth. There are only 390 x 312 pixels (340 x 272 on the 38mm), but at this size, that’s enough.