Ever since the Watch’s announcement back in the autumn, battery life has been flagged as a likely weakness. The supplied charger clamps onto the back with a magnetised disc, though not quite as firmly as I’d have liked. On the plus side, for UK users, its new mains-to-USB adaptor has a fold-up 3-pin plug that collapses with one finger and goes in your bag without puncturing it. You can also buy this from the Apple Store for £25. 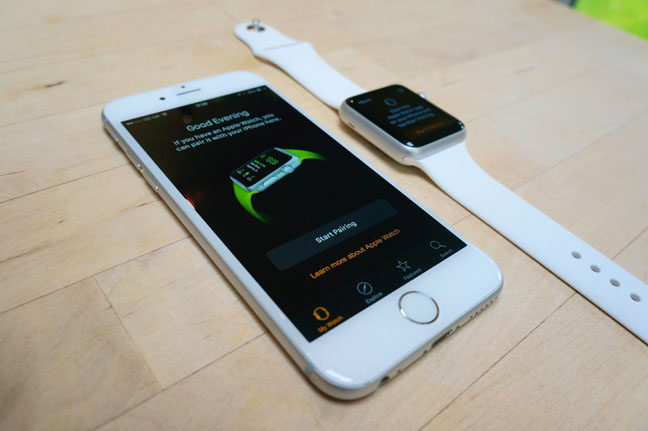 The Watch is more of a secondary display than a device in its own right. Pairing it with your iPhone is the essential first step in setup

My Watch arrived showing 60 per cent charge. By the time I’d completed iPhone pairing, allowed the Watch companions to my existing apps to install on it, and had a nose around the user interface, that had dropped below 40 per cent. Seven hours later, it was at 13 per cent. After a full charge, however, the Watch easily made it through the next day of intermittent use with battery to spare. On the third day, I checked at lunchtime: 96 per cent.

It’s not that Apple managed to squeeze in a bigger battery than expected. At 205mAh, the capacity is half that of some smart watches. Even with the efficient S1 chip design, you could use that up pretty quickly. So the Watch is simply designed, from top to bottom, to discourage you from doing so. 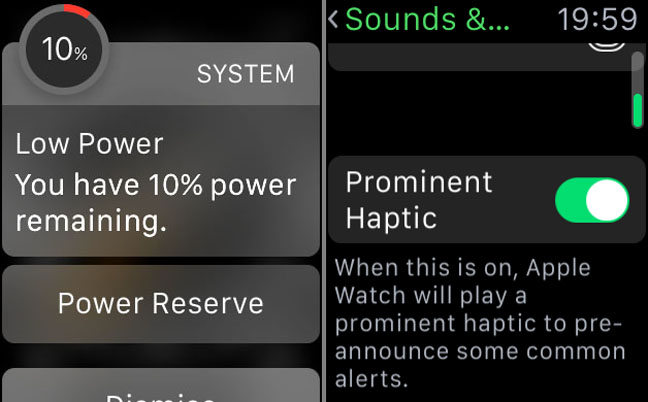 Left: Unless you use the Watch very heavily – and I’d have to wonder for what – the battery should last you through the day. If it does run low, a Power Reserve mode kicks in to eke out the last few percent of charge for as long as possible. Right: Apple's “Taptic” Engine is a refinement of the mobile phone vibration feature that gets your attention by bumping your wrist. There are different effects for different notifications

Douglas Adams imagined a genetically engineered food animal that wanted you to eat it. This is the more ridiculous obverse of that coin: a product that doesn’t want you to use it. You wouldn’t like me, madam! Try the salad!

Most of the time the Watch is dormant, with an empty black screen. Raise your wrist and, after a reluctant fraction of a second, the display comes to life. Lower your wrist at any time, even half way, no matter what you’re engaged in, and it instantly goes dead again. It’s happier that way. 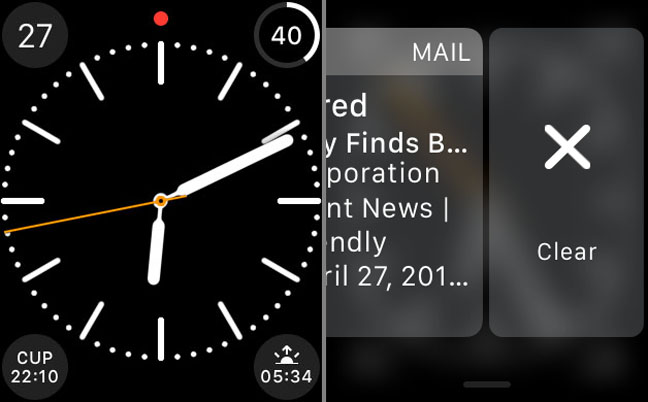 A red dot at the top of your clock face indicates notifications; swipe down with your finger from the top of the screen to reveal them. Each item can then be dismissed by swiping left. This can get a bit laborious, but you can control which notifications are received in the Apple Watch app on your iPhone

This work-shy ethos pervades. In every task, the screen is mostly black and the functionality too limited to detain you. Tap the date on the clock face and you get a Today screen listing your events for the next week. A chevron at the top left reveals the current month. Tapping any date takes you back to Today. You can’t see any other month or day. There’s no option to add an event.

Well, that’s not quite true. You can hold down the Digital Crown (or say “Hey Siri”) to activate Siri and say something like “Create a calendar event for Budget Meeting on 24th May from 10am to 4pm”. Good luck setting up an alert to remind you this is happening, though. When I tried including a request for that, Siri not only ignored it but got mixed up about the time of the event. 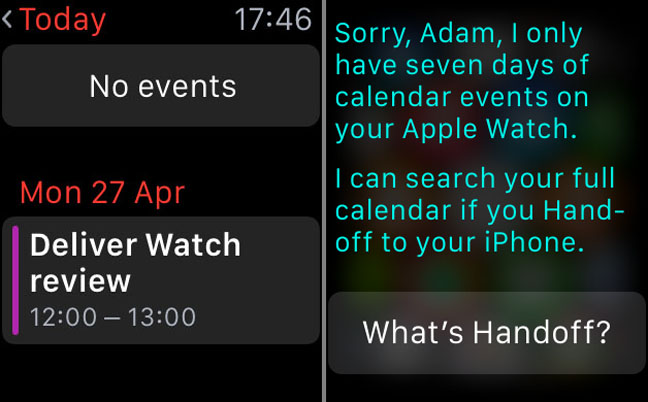 Accessible from the date display on the clock face or the Calendar icon on the Home screen, Watch’s calendar support is quite limited: you can see upcoming events, but for anything beyond the current week, or to set up future events with detailed settings and alerts, you’ll have to resort to your iPhone

Most things that you can do actively, rather than receive passively, depend on Siri. For example, at the supermarket I got a buzz on the wrist from the Watch’s Taptic Engine. It was my wife texting me to get crisps, and with a quick swipe and a tap I sent back “OK” from the preset replies.

Yet when I realised I needed to check what kind of crisps, no, I didn’t dictate that message to Siri in the middle of Waitrose. Nor is there any option, anywhere in the Watch’s OS, to use an on-screen keyboard. So I had to put the shopping down after all and get my iPhone out, like some kind of non-Watch-owning pleb.