SpaceX in MONEY RING shot, no spare juice for tail backdown this time 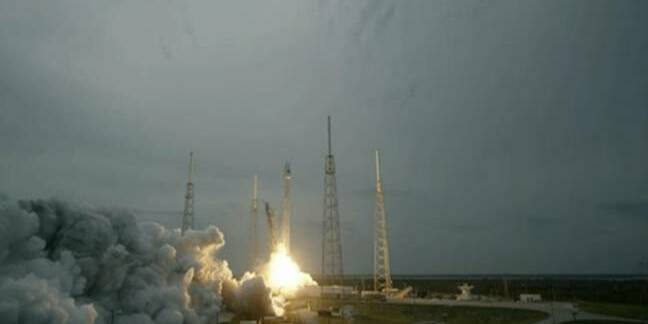 Pic For the second time in a month, Elon's Musk-eteers at upstart rocket startup SpaceX have fired cargo into space – this time delivering the first satellite owned and operated by the former Soviet republic of Turkmenistan.

The launch was delayed slightly due to thick overhead clouds and thunderstorms in the area, but a gap in the weather opened up and the Falcon 9 rocket left the launch pad in Florida at 1903 ET (1203 UTC) on Monday.

There'll be no landing attempt for the first stage this time, as the rocket needs all its fuel to punch the payload into geosynchronous orbit (the "Money Ring"). In previous launches, SpaceX has tried to land, in one piece, the lower reusable stage of its Falcon 9 rockets at sea.

The satellite, officially dubbed TurkmenAlem52E/MonacoSAT, is a 4,500kg communications platform that will give Turkmenistan its first foothold in space. The satellite will use its 38 active Ku-band transponders to broadcast television and radio communications and provide telephony services over Asia, Africa, and Europe.

It's an important step forward for Turkmenistan, a state that is more often mocked for its idiosyncrasies than lauded for its technological progress. The former Soviet state declared independence in 1991, and since then has been ruled by a series of autocratic presidents who have used the country's vast oil and gas reserves* for their own purposes.

At independence, the then-communist leader of Turkmenistan, Saparmurat Niyazov, was elected president, although no other candidates were allowed to stand. He proceeded to replace the Russian Cyrillic alphabet with a Latin-based alphabet specific to the Turkmen language, renamed the months of the year (January after himself, April after his mother), and began massive building projects such as the Neutrality Monument, a 317-foot tall building topped by a gold statue of Niyazov that rotated to face the sun.

After Niyazov died in 2006, the country has become slightly more normal. His vice president, Gurbanguly Berdimuhamedow, took down the Neutrality Monument, reverted the calendar, and instead used the state's money to develop other industries besides hydrocarbons. He also increased spending on education and opening up the country to foreigners. But he kept the electoral system, winning 97 per cent of the last ballot.

Monday's launch is part of his expansion plans and should give the country the ability to handle its own telecommunications infrastructure without being dependent on Russian or Indian help. The satellite, which is expected to last 15 years in orbit, is the first of several planned launches for the state. ®

*An example of how rich Turkmenistan is in hydrocarbons can be found in one of its unique and more infamous natural landmarks.

In 1971, Russian engineers prospecting for oil found a gas seepage in the Karakum Desert and decided to burn it off. They ignited the gas pit, expecting it to go out after a couple of weeks once the gas burned off. But they dramatically underestimated the reserves that fed the gas leak.

More than four decades later, the gas is still burning, and the site – now known as the "Door to Hell" – has become a local tourist attraction, as well as a headache for environmentalists [though less of one than if the engineers had not lit the gas, methane being a much worse greenhouse gas than carbon dioxide - Ed].

Burning through the Amazon billions with rockets