Someone is trying to buy Salesforce – but who could it be? 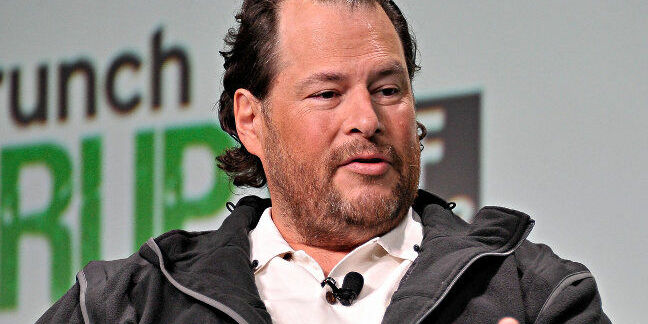 Salesforce.com is being eyed up for an acquisition – and has hired financial experts to guide it through the biz gobble, it's claimed.

"Salesforce does not comment on rumors or speculation," the San Francisco-headquartered cloud giant told The Register this afternoon in response to whispers.

There has been no formal offer for the software-as-a-service business, Bloomberg's newswire notes. Salesforce stock was up 11 per cent as of Wednesday afternoon.

The identity of the bidder is not known at this time, but early speculation puts Oracle boss Larry Ellison at the top of the list of potential buyers. Salesforce founder and CEO Marc Benioff is a former Oracle man himself, and lists Ellison among his friends, despite a sometimes contentious relationship.

This speculation largely centers around the assumption that Ellison's enterprise IT goliath is one of the few organizations that could actually afford to acquire Salesforce and its massive US$47.1bn market cap. Oracle and Salesforce have been working together since 2013 on a partnership deal that sees Salesforce rely on Oracle's database software.

Other potential buyers are IBM, SAP, and Google – and possibly even HP Enterprise.

Should Salesforce indeed sell out, or be bought out, the acquisition would be among the largest ever for a tech firm, dwarfing the likes of HP-Compaq (US$25bn) and Facebook-WhatsApp (US$22bn). ®