VERY NSFW Reg reader Mike W has sent us something rather interesting from Facebook, which asked him to prove he's human with the test below that asked him to pick out pictures of butterflies. We'll explain the white space at grid position A2 after the image. 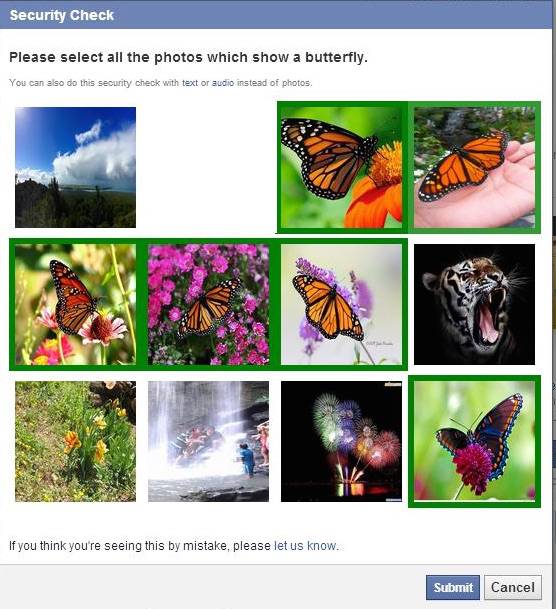 Back to that white space, which we excised because it is Very Not Safe For Work. Suffice to say it is a part of the human reproductive system that has been shaved, pierced and tattooed with a demonic motif.

Did we mention it's VERY NOT SAFE FOR WORK?

We have now. So don't blame us if you get in trouble for viewing the image.

That's SO not a butterfly. And if you call it that, please don't explain why

We then asked Facebook to confirm that it uses this kind of CAPTCHA and, making sure we didn't find ourselves on the wrong end of a sexual harassment complaint, sent a redacted version of the offending image to Facebook's media folk. The Social NetworkTM confirmed that it is using just such a CAPTCHA and sent us this statement:

"We sometimes use visual CAPTCHAs to help people validate their activity on Facebook more easily than text versions, and we use a set of filters to help remove objectionable images from appearing. One of those images mistakenly appeared in this case, and we quickly removed it once we became aware. We’re sorry this image appeared, and we’re revisiting the image categories for this feature to help ensure that the selections are consistent with our policies.”

Chalk this one up, then, as proof that image-recognition algorithms remain susceptible to devilishly painful pictures. ®