Pic NASA's New Horizons space probe has beamed back photos that seem to show that dwarf planet Pluto has a strange effulgent spot on its pole. 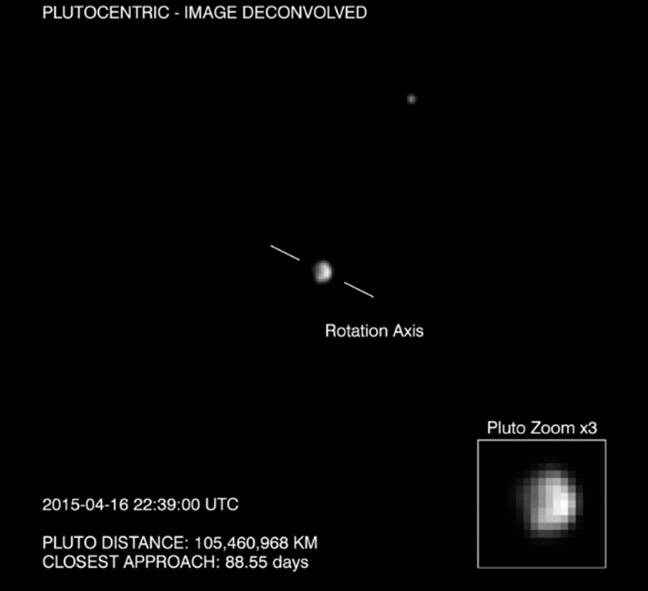 The spacecraft is more than 60 million miles away from the tiny world. New images released by NASA at a press conference on Wednesday show Pluto being orbited by its biggest moon Charon. More interestingly, the pictures – packaged here as a GIF – show a persistently bright spot on the right of the planet's surface, along with darker patches that disguise surface features and make the planet seem lumpy.

"At 3 o'clock the images remain bright; that's a pole and maybe a polar ice cap. That's very, very exciting; it's suspiciously suggestive of a polar cap."

We know so little about the composition of Pluto that it's hard to say what the ice is formed from. The best guess at the moment is that it'll be frozen water, carbon monoxide, or possibly ammonia.

Measurements from Earth show that Pluto is about 70 per cent rock. The images show the surface clearly has geological formation on the surface that may be volcanic or chemically produced. To the naked eye, the dwarf planet appears reddish, although not as red as Mars.

The probe's footage [GIF] also shows the effects of Charon on Pluto's orbit – technically it's a binary system since the mass of Charon (described as "the size of Texas" by Stern) is large enough to perturb the Plutonian orbit significantly.

The next set of images will be taken in May, when the probe is much closer to Pluto. We won't get them back for two weeks due to the distances involved and the 1Kbps bandwidth for data transmission. The probe is now barreling down on Pluto at about four kilometres a second (8,950 miles per hour) and will reach its closest point on July 14.

"These discoveries are the first of a kind, and we're now close enough to get imagery where no Hubble has gone before," said John Grunsfeld, associate administrator for NASA's Science Mission Directorate.

"The US has been the first to flyby every planet of the Solar System and with New Horizons we are opening up a new realms and who knows what we'll find?" ®