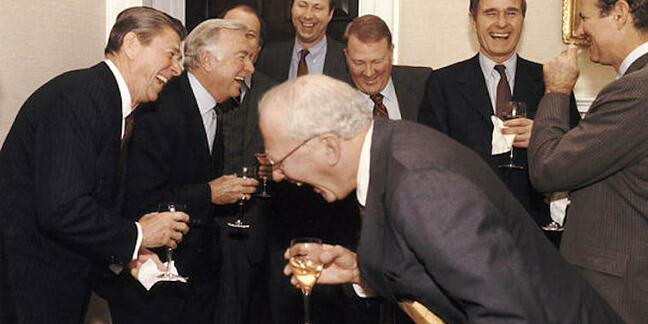 'And then I told them, of course we'll end surveillance'

A law bill to mildly curb the NSA's blanket surveillance of innocent Americans has taken an important step toward being passed.

On Thursday, the US House of Representatives' justice committee voted 25 to two in favor of a revised version of the USA Freedom Act – the original was killed last year in the Senate.

Now it's looking as though an unholy alliance between the White House, the Tea Party, and disaffected congressional moderates may force the bill to be passed.

"The USA FREEDOM Act reforms our nation’s intelligence-gathering programs to ensure they operate in a manner that reflects core American values. We urge both the House and Senate to move expeditiously on this legislation so that we rein in government overreach and rebuild trust with the American people.”

Sensenbrenner knows a thing or six about this – he was one of the authors of the Patriot Act that enabled much of today's surveillance operations, and developed the original USA Freedom Act to fix the earlier legislation. This revised version is largely similar, but with a few key changes.

The legislation under consideration would renew Section 215 of the Patriot Act, but amend it so that bulk data collection – like the slurping of all cellphone call logs – would be banned. The intelligence services would have to ask telcos for specific data about an individual or a specific device if there is a "reasonable, articulable suspicion" of wrongdoing.

The workings of the secretive the Foreign Intelligence Surveillance Court would also be reformed by tapping up independent experts to advise the government on civil liberties and technology issues. The court would also be required to declassify details on its “significant” rulings, except where national security is involved.

There are some kickers, however. The bill introduces new laws to allow the attorney general to nominate specific individuals entering the US for targeted intensive surveillance, subject to court oversight within 72 hours, and raises the mandatory minimum sentence for "providing material support of terrorism" from 15 to 20 years.

There's no mention of reining in surveillance by other government agencies: the Drug Enforcement Administration has been running its own bulk surveillance program since before the Twin Towers fell in 2001, and there's nothing in the USA Freedom Act to stop this, although lawsuits might.

The bill does nothing to rein in Section 702 of the FISA Amendments Act, which provided legal cover for the NSA's PRISM program – the program that allows spies to pull information about foreigners out of the data centers of Google, Facebook, Yahoo! and others.

There's also nothing in the bill about the rights of non-Americans to privacy, so if you're not a citizen in the Land of the Free then tough shit – US intelligence can do what it likes with your data.

"The bill is far from ideal. But it does shift the status quo towards more privacy and substantially limits the scope of collection by the government for tangible things under three different laws, and it offers small but real institutional reform to the FISA Court that only Congress can create," said the EFF in a statement.

"We've been clear that we must end mass surveillance under all surveillance authorities. We're disappointed that this bill does not do more toward that end, but the new USA Freedom Act serves as a welcome first step and should be seen as such."

The bill will now move to the House of Representatives for a vote, and similar legislation will be introduced to the Senate shortly. So far, it looks like there are enough anti-government Republicans and members of the Democrats to get it through the lower chamber without a problem.

The Senate might be a different matter. The US Senate Majority Leader Mitch McConnell (R-KY) has introduced his own bill there that simply reauthorizes the Patriot Act as it stands, but that's looking unpopular with members of his own party who have a more libertarian bent.

Presidential hopefuls Senators Rand Paul (R-KY) and Ted Cruz (R-TX) have both said that they would opposed a straight reauthorization of the Patriot Act, but it's not certain if they will get behind the USA Freedom Act. Cruz voted for its earlier version, and Rand against, but that may change.

If the bill does get through both chambers, President Obama would almost certainly be happy to sign off on it. The surveillance state exposed by Edward Snowden has been a millstone around Obama's popularity with the party faithful, and the chance to be seen doing something on the issue would be welcome.

Congress is working to a tight deadline on this; key sections of the Patriot Act, including Section 215, will expire on June 1, and that makes lawmakers nervous. If the famously fractious Congress can get moving, however, the bill could well make it onto the statute books. ®