Naked at the Albert Hall

Tracey Thorn is a singer most famed for being half of Everything But The Girl. In 2013, her acclaimed autobiography was published, entitled Bedsit Disco Queen. Naked at the Albert Hall is named after a recurring nightmare Tracey has had – it is her musing on the act of singing and being a singer.

The book opens by stating the near universality of singing – everyone does it. Having herself not appeared on stage for 15 years due to stage fright, Tracey is big on the neuroses that go to make a singer: “We are all frustrated Ear, Nose and Throat specialists”, she opines after discussing the curse of phlegm.

Tracey’s all-time fave is Dusty Springfield, who is quoted as saying, “the bigger the hair, the blacker the eyes, the more that you can hide”. Perhaps not too surprisingly, there is quite a long list of women who have suffered similar problems to Tracey, including Linda Thompson, Sandy Denny and Karen Carpenter. The exception to the rule is Alison Moyet, who claims to be fine singing on stage, but a mess elsewhere.

The same qualities which made Bedsit Disco Queen such an engaging read are apparent in Naked at the Albert Hall. Ms Thorn is a thoughtful individual who looks beneath the surface of things and draws fascinating conclusions. Her sources are eclectic to say the least, so we learn her opinions about the pitch correction software Autotune and her guilty pleasure: X Factor. We also hear that she has only sung karaoke once. The song? Will Young’s Leave Right Now.

She also confesses: “I’d love to be Adele for a day.” My favourite quotation is from Claude Debussy: “The attraction of the the virtuoso for the public is very like that of the circus for the crowd. There is always the hope that something dangerous will happen.” 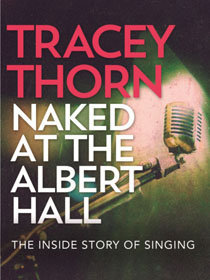 There is plenty of interesting food for thought in this book and, like Bedsit Disco Queen, you don’t have to be a massive fan of Tracey’s music to appreciate her literary work.

Naked at the Albert Hall probably concentrates on singers of her own ilk, i.e. those that can hold a note. A work like this is bound to contain omissions and despite references to the likes of John Lydon, Iggy Pop and Janis Joplin, we are offered few insights into how these individuals did it.

The book reminds me a little of Nick Cave’s The Secret Life of the Love Song in its erudite investigation into what makes a singer and their songs but Tracey is not quite as self-absorbed and takes herself less seriously than Nick.

Naked at the Albert Hall is a fascinating work which is likely to appeal to a wide range of readers, musicians, singers, would-be singers and fans of music of all genres. Tracey Thorn may never sing on stage again, but it would appear she has made an alternative career for herself as a writer.