Unfriended: Odious screen-teens get theirs in this flat horror

Buffering is not a good device for building on-screen tension 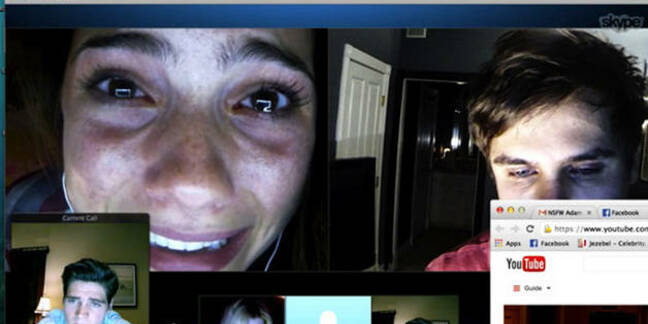 Film Review Few movie genres see as much innovation as horror, pioneer of the found-footage style and master of the macabre comedy. Just because something is new and clever doesn’t actually mean it will make a better film.

Unfriended has a good idea and it runs with it for the whole movie. We open on a pretty teen girl’s Mac screen and that’s where we stay. We’re basically sitting on her shoulder as she Skypes her mates in a group video call, writes iMessages to her all-American boyfriend, watches videos on YouTube and reads messages and looks at photos on Facebook. If this all sounds a tad boring, that’s because it kind of is.

I’m guessing the film wants to create a sense of claustrophobia by keeping us in one place. The Skype heads and YouTube videos do much the same job as found footage has done in other films but watching someone else on their computer is fundamentally dull and the film doesn’t quite do enough to combat that.

The whole reason our teen heroine (Shelley Hennig) is stuck on Skype is because she and her friends were once mates with Laura Barns (Heather Sossaman), until she tragically killed herself after some extreme cyber-bullying following the posting of a drunken video of her. As the self-entitled brats are messing about online, Laura joins their Skype call, starts sending them messages, photos and videos and, ultimately, forces them to be suicidal.

Her goal is to get them to admit what a horrible bunch of little shits they are, and boy does she deliver. These teenagers aren’t just privileged, annoying and self-involved, they’re also utter assholes. And not just to people they don’t think are cool enough but even more so to each other. The scene is set when, just before inviting the sixth member of their toxic little crew into the Skype call, they have a good moan about how most of them don’t like her very much.

Horror movies don’t really need you to empathise with the victims, so the fact that you can’t wait for Laura to pick them off, one suicide at a time, doesn’t really detract from the film. There just aren’t enough chills and thrills to carry you through the horror of that melting stutter thing that Skype video does when you move your laptop, the pinwheels, the waiting for files to load and other annoyances of computer use you have to live through with the screen-teens. Buffering is not a good tension-building device: it’s just irritating.

There are a few creepy bits and a couple of gruesome moments, but overall, Unfriended seems more like a revenge movie than a horror. You shouldn’t really walk out of a horror film feeling cheerful about the deaths of some kids and glad that the evil possessive spirit got their day online. You should have at least some niggling chills running down your spine, a couple of images you wish you hadn’t seen seared into your brain.

It’s certainly interesting, but it ain’t the new Blair Witch. ®

Not so smart after all: A techie's tale of toilet noise horror

'The perils of wrist-based motion sensors'

The Eldritch Horror of Date Formatting is visited upon Tesco

Best before end? Who reads those things anyway?

Oracle AI's Eurovision horror show: How bad can it be? Yep. Badder

'Baby by myself the stain grows more obvious...'

Two-hour outage sees users forced to speak to each other

We asked for your Fitbit horror stories and, oh wow, did you deliver: Readers sync their teeth into 'junk' gizmos

'This is the last Fitbit I will buy'

Aliens and sinister AIs from the mind behind the greatest TV show ever? Colour me aroused