The seedier side of subterranean 19th century London

However, as time went on, the seedier side of Victorian London started to reckon a dark, underground tunnel might be the perfect place to conduct some nefarious business and the numbers of respectable tourists declined. Various projects to make more money out of it were tried, including turning it into what must have a been a fantastical underground fairground to attract even more visitors, before it was sold to the East London Railway Company in 1865. A part of the original tunnel is still visible today if you peer down the line from Wapping station towards Rotherhithe. 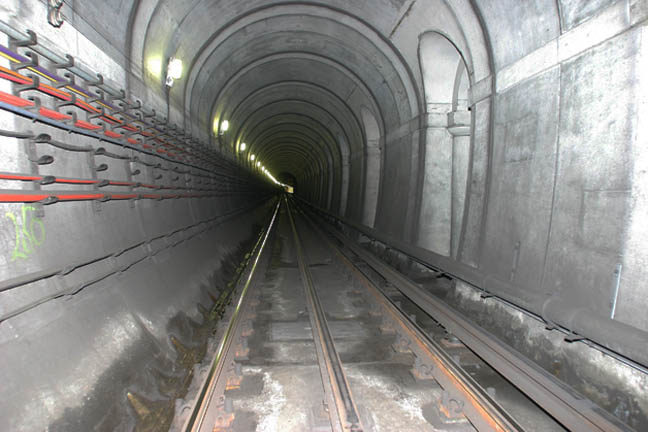 Part of the Thames Tunnel is used today by the London Overground system between Wapping and Rotherhithe. Photo: Brunel Museum

Although it was a financial disaster, the tunnel was a marvel of engineering and made underground transportation around the world a possibility, all because of the tunnel shielding method invented by Marc Brunel. 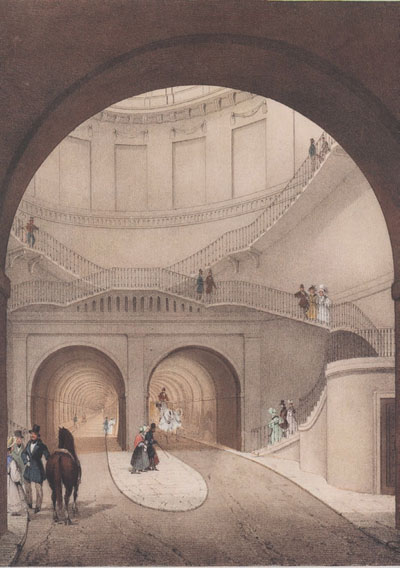 The Grand Entrance Hall to the Thames Tunnel, when the tunnel opened in the

Before his innovation, tunnels had been attempted twice before beneath the Thames, but had failed because of the soft clay, quicksand and flooding that collapsed the efforts. The tunnelling shield was a sort of cage structure that was pushed to the front of the tunnel. In the original design, men in the cages would dig forward a little, while those behind were shoring up the tunnel by building its walls. The design was later improved by engineers working for the railway companies building the London Underground and still forms the basic idea behind modern tunnel boring machines.

Despite the vast improvement in methodology, digging the Thames Tunnel was still a dangerous job; one in which Isambard himself, working as an engineer for his father, nearly died. He was the only survivor of the second major flood of the tunnel in 1828, when six men died. Half-drowned, he was sent to Bristol to convalesce and here he designed his first individual project, the Clifton Suspension Bridge. Although it’s the most famous of his bridges, it’s by no means the only one that Isambard designed, which you’ll learn if you take the Museum’s boat tour of London, which finishes in the Grand Entrance Hall underground chamber.

The tour handily starts at Embankment Tube Station, where you meet your guide at 10.45am on Tuesdays, Thursdays or Saturdays. Be prepared, though - the tour is a long one and if you’re going to do it in the depths of winter, or you’re not the type that can last till a late lunch, you should eat a good fry-up before you set off. You take the ordinary river taxi (at a discount) with your enthusiastic guide, the museum director Robert Hulse.

He points out the remains of Isambard Brunel’s Hungerford Suspension footbridge, since replaced by the railway bridge for Charing Cross Station and the Golden Jubilee footbridges, with the suspension chains carted off for use on the Clifton Suspension Bridge. But he’ll also point out that Tower Bridge – arguably London’s most famous – and the Blackfriars Railway Bridge were designed by Sir John Wolfe-Barry, whose partner for many years was Henry Marc Brunel. Brunel worked on Tower Bridge and helped design Blackfriars Railway Bridge, which is now the world’s largest solar-powered bridge - and houses Blackfriars station.

There’s just time for a quick (and the only) toilet break before you get off the boat at Limehouse to visit the site where Isambard built and very slowly launched the biggest ship of its time, the SS Great Eastern. The colossal iron sailing and steam ship was by far the largest ever built: it was so huge that people in some ports in Asia apparently ran away when they saw it. 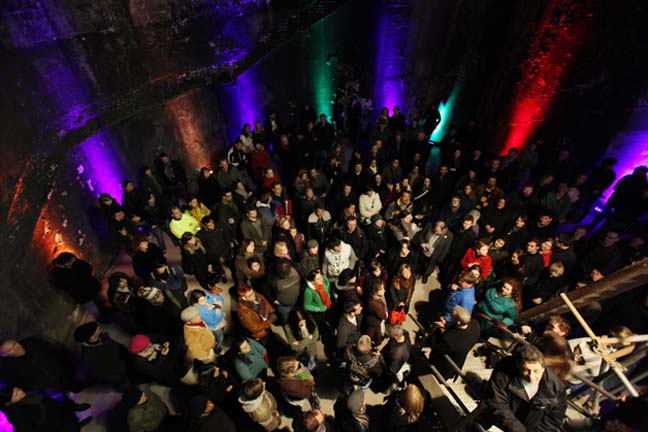 The underground chamber today – part of the Grand Entrance Hall, beneath the Museum. Photo: Brunel Museum

The ill-fated ship was another Brunel technical masterpiece and another financial disaster, failing to live up to its considerable potential. The ship seemed doomed from the start, with its long – and boring for spectators – sideways launch and the collapse of its engineer just afterwards. Isambard Kingdom Brunel suffered a stroke and died ten days later at the age of 53.

Money problems dogged the construction of the Great Eastern, which Isambard took on after his success with pioneering steam travel to North America on the Great Western and Great Britain. The Great Eastern was intended for longer voyages as far as Australia, and because coal had not yet been discovered on the continent, it was built to carry all the coal it would need for a round trip from Britain. The ship was powered and manoeuvred by single screw propulsion and paddle wheels, along with auxiliary sails.