Brunel reckoned he would need around £500,000 to build the ship, but the naval architect and shipbuilder John Scott Russell only tendered £377,200 for the project, which Isambard accepted. Because of the size of the finished ship, it had to be built sideways to the Thames and Brunel was planning a mechanical slip to get it into the water. However, Scott Russell went bankrupt, leaving the Eastern Company to finish the ship, despite the fact that three-quarters of the hull hadn’t been finished and there were 1,200 tons of iron missing. 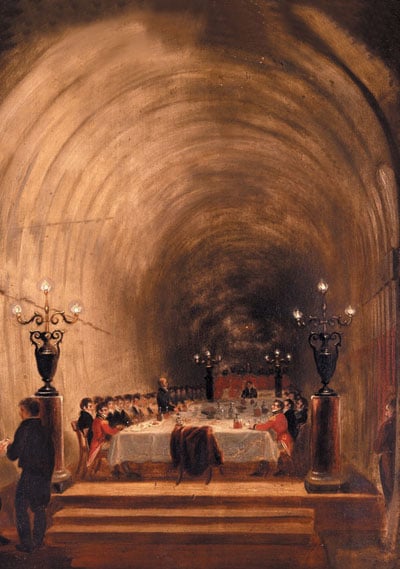 convince investors it was safe in 1827. He almost drowned when it flooded a year later

Brunel agreed to launch the ship in November 1857, although he wanted to spend longer on her. He wanted a quiet launch, explaining that the sideways slip would be boring for spectators. He was horrified to discover that Eastern Company directors had sold 3,000 tickets for the launch and others who heard about it swarmed the area seeking vantage points to watch.

The first launch failed because the steam winches and manual capstans being used to haul the mammoth craft, nicknamed Leviathan, weren’t enough. The ship eventually managed to get into the water at the end of January the following year, after hydraulic rams were brought in.

The Great Eastern was in the water, but it still had to be fitted out and it was now the Eastern Company’s turn to be approaching bankruptcy. The directors quickly formed a new company, the Great Ship Company, and bought the ship for peanuts so as to have enough money left over to finish her. Finally, she set out on her maiden voyage at the end of 1859 but only made it as far as Hastings before there was a huge explosion, killing five stokers with superheated steam and injuring others. The accident was caused by a closed steam exhaust pipe, but luckily the ship’s strong bulkheads contained the explosion.

This wasn’t the only piece of bad luck the ship was to have, however. It had been built for trade and transport to Australia and the Far East, but its owners didn’t believe there was enough trade to send her that far. So the Great Eastern only ever sailed the Atlantic. The economies of scale and efficiencies Brunel worked out were for long trips around the world – as a transatlantic steamer, the Great Eastern just wasn’t worth its investment.

The ship was eventually broken up in 1890 and it was the SS Great Britain – also designed by Brunel and the first iron steamer to cross the Atlantic – that survived to become a tourist attraction in Bristol.

After a walk along the river with a view towards Greenwich, the tour hops on the DLR and Overground lines to get to the Museum and the underground chamber, including a quick stop at Wapping to look down the original section of Thames Tunnel. Hulse will proudly tell you as you exit at Rotherhithe that the Brunels’ Thames Tunnel is the oldest section of the oldest underground network in the world and without it, modern cities would not be possible. 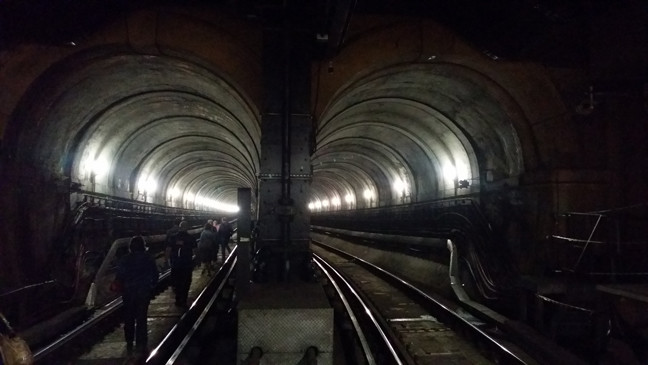 Brunel's Thames Tunnels (pictured here in 2014) were a financial failure and were bought up by the East London Railway Company in 1865. They now form part of the London Overground network

The tour ends with a nice frisson of excitement in the underground chamber with the tale of how Isambard Kindgom Brunel – voted second only to Winston Churchill in a television poll of the British public to find the 100 Greatest Britons – nearly drowned. The museum is worth a wander around, but the cafe isn’t really worthy of the name, consisting mainly of a chap with a kettle. However, Hulse may tell you he’s off to lunch at the nearby Mayflower, the oldest pub on the River Thames, where Brunel himself once supped, and you’re welcome to join him.

If you’d rather not, there’s the Old Salt Quay pub a little further along the river, or you can head towards Canada Water and Surrey Quays station for more pubs and restaurants. This is also, incidentally, one of the places where those in your group who aren’t enamoured of engineering prowess can hang out, as there’s a cinema here. Otherwise, Greenwich with all its museums and sights is not too far away.

GPS to The Brunel Museum

Train: Overground to Rotherhithe station, one hundred yards away or the Jubilee Line to Canada Water or Bermondsey for a ten minute walk.

10.45am Tuesdays, Thursdays and Saturdays. Meet at Embankment Station, which can be reached by Northern, Bakerloo, Circle and District Lines. The guide will be carrying a London Walks pamphlet.

10.45am on Sundays and 4.30pm on Wednesdays. From Bermondsey tube station on the Jubilee line.

Also, JunoCam malfunctioned again, time to get new kit up there
Science31 Jan 2023 | 12