Word to your mother: Office 2016 preview flung at world + dog

Microsoft on the verge of autumn launch, plus: world's biggest fondleslab

Ignite 2015 If you want to get your hands on Office 2016, Microsoft has made it available now for download – but be warned, you'll have to take Office 2013 off before you do.

Microsoft has marked the opening day of its Ignite conference (think TechEd and a bunch of other sysadmin shindigs rolled into one economical bundle) in Chicago by releasing a free preview build of Office to everyone. Developers were able to take the software on a test drive in March.

The suite will run on Windows 7, 8 and 10 PCs and tablets. You'll have to uninstall Office 2013 to install the new version. Once you get the 2016 edition in place, Microsoft will provide on-the-fly updates right up to its formal launch this autumn – at which point you'll have to pay up to continue using it.

Meanwhile, Office 365 Pro subscribers can use the software online from the cloud right now.

Microsoft is going to use Office as a showcase for Windows 10 universal apps, which can run on PCs, tablets and smartphones. The universal builds of Word, Excel, PowerPoint, Outlook and OneNote have been crafted so that they will adapt their user interface for the systems they are running on, such as making buttons bigger for tablets. Builds sporting the traditional desktop user interface will still be available for PCs, laptops and the like.

Microsoft's cloud backend ties all them together for collaborative working. 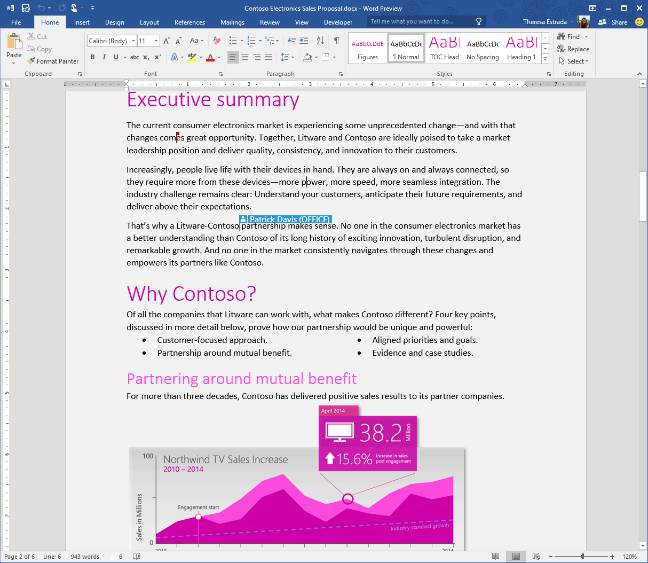 The keynote demos concentrated heavily on this, showing real-time collaboration and editing in groups and analysis of traffic patterns within working teams to see who's napping at their desk. In Q3, Skype for Business will be integrated to add video to collaborative sessions, with an upper limit of 10,000 participants.

Microsoft is also updating its Office Graph application, which launched in September and sorts and displays documents via Office Delve. Graph is behind the Clutter app in Outlook that prioritizes email in your inbox, and it will be showing up in more Office applications. 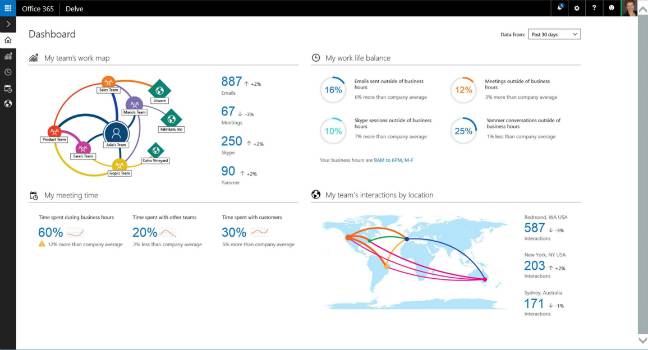 Sway, the not-quite-PowerPoint multimedia tool for Office, is going to be rolled out to Office 365 business and education subscribers later this month as well – home users have had it since the autumn.

Office in Windows 10, once it's out in the summer, will allow you to perform "business intelligence" searches in some applications using the voice-controlled Cortana assistant. Joe Belfiore, a veep in Microsoft's operating systems group, used voice commands on stage to get the latest Ignite attendance figures (a little over 23,000 at the time) into an Excel spreadsheet.

He also showed off Cortana's ability to take some of the load off IT support: the software can answer basic computer navigation and troubleshooting questions via the "Tell Me" function. Belfiore said Cortana is constantly improving its ability to pick useful nuggets from masses of data.

To display all this goodness, Microsoft's general manager for the Office marketing team Julia White showed off the new Surface – an 84-inch wall-mounted all-in-one armed with movement-tracking cameras, microphones, NFC, Bluetooth, and Wi-Fi, billing it as the ultimate high-tech whiteboard.

White stressed that there are going to be other Office add-ons coming down the line before the launch. Redmond wants a lot of customer feedback before going live with the whole suite in the autumn. You can find White's overview of today's Office 2016 announcement over here. ®