Cisco CEO Chambers to step down, passes baton to Robbins

Analysis Cisco has finally made the long-anticipated decision about a replacement for long-time CEO John Chambers: 49-year-old Chuck Robbins.

Robbins is no newcomer to Cisco, having been with the company since 1997. His most recent role was as senior veep for worldwide operations, and Cisco's announcement also credits Robbins with building The Borg's partner program, driving its commercial business segment, and sponsoring the security operations (including acquisitions like Sourcefire and Meraki).

Chambers will become executive chairman on July 26, and remain on the Cisco board.

When Chambers joined Cisco its turnover was a paltry US$70 million, and when he took the reins in 1995, the company's turnover was US$1.2 billion; it now stands at around US$48 billion.

The foundation of that growth was multifold.

Perhaps Cisco's most important decision in the first half of the 1990s was its devotion to the Internet's TCP/IP protocol stack. At that time, governments were drafting strategies to roll out complex and overweight OSI protocol implementations, and analysts believed the corporate world would follow suit.

Whatever their plans for the future, in the 1990s corporates were trying to patch together wide area networks devoted to various proprietary protocols (Novell NetWare, DECnet, IBM SNA, Banyan Vines and others).

The Web-led explosion of the Internet swept many competitors from the field (who remembers names like Proteon Networks?). In short order, vendors were crafting TCP/IP stacks for their protocols, the corporate world began standardising their networks on IP-based routing – and Cisco had the first-mover advantage.

The Cisco of the 1990s was also a fierce competitor in channel strategies, and others in the early IP routing market found it hard to keep up (leading, for example, to the acquisition of chief rival Bay Networks by the soon-to-be-doomed Nortel Networks).

An early and short-lived partnership with Synoptics (which merged with Wellfleet to become Bay Networks) gave Cisco another important insight: the need to integrate routers with Layer 2 Ethernet switches.

That, plus Cisco's investment in its own silicon, put Cisco among the front-runners for telecommunications carriers trying to integrate myriad core networks (high-capacity ATM links, SONET for optical transport, plus customer-facing overlays for voice, ISDN, with HFC and ADSL arriving in the late 1990s).

A blip in the first tech gold rush – which briefly saw The Borg valued at US$500 billion – demanded a response. Chambers and Cisco stuck with the fundamental assumption that IP would become the one-protocol-to-rule-the-world, but at the same time responded to the way telecommunications networks were disaggregating.

IP telephony was the clearest example of this at the time, and Cisco had already both developed and acquired the technologies that were to become the basis of its unified communications push, still a key portfolio line today.

To deliver carrier-grade IP telephony also needed the ability to run software platforms at scale, a requirement that contributed to Cisco's interest in adding server platforms to its portfolio.

The 2000s were characterised by other pushes, particularly expanding its enterprise footprint and the less-successful interest in the consumer market that resulted in the acquisition and later release (in the case of Linksys) or closure (the Flip cameras from Pure Digital) of the targets.

Paradoxically, as Chambers hands over to Robbins, some of the shifts it helped to pioneer stand as threats to the company. VoIP and IP telephony decimated the market of proprietary voice switches both at the carrier grade and in the PBX; now, that same model is disrupting the Ethernet switch market.

Cisco under Chambers was also a very early proponent of what's now referred to as the Internet of Things, something that's yet to swell The Borg's balance sheet, but which keeps Cisco's name buzz-worthy.

However, growth has been hard to come by in recent years. Reuters notes that its operating profit was largely unchanged over the past five years.

The Borg has long had a voracious appetite for acquisitions, a strategy that has characterised Chambers' long years at the helm. In the late years of the first tech boom, successful switching and routing startups like Stratacom were its common fare. 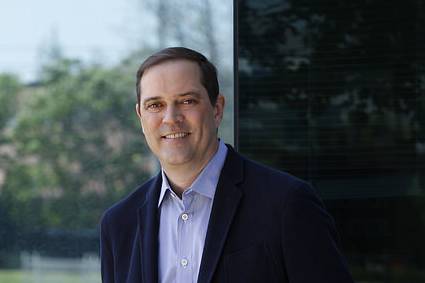 Chuck Robbins moves into the corner office on July 26

Its 2000 acquisition of Radiata pitched Cisco into the WiFi business and laid the foundation for later long-running lawsuits over Australia's CSIRO's contribution to the technology.

2000 was a peak for Chambers' – and Cisco's – appetite. In that year, The Borg swallowed 23 other companies. The tech wreck crimped that to a mere two acquisitions in 2001 and five in 2002. Cisco has remained far more discriminating in its choice of targets since then, and in 2014 made six acquisitions including ThreatGRID, Tail-f and Neohapsis.

Not all of the acquisitions have been successful. In particular, it found the consumer gadget market difficult – for example, its 2009 acquisition of Pure Digital Technologies, maker of the Flip high-definition video recorder, turned out to be a dog and it closed the operation in 2011.

Reuters quotes Fort Pitt Capital Group's Kim Forrest as saying Robbins might choose to “refocus” the company, but Robbins said his first 90 days will be spent listening because “the market is moving too rapidly for any one individual to think they have all the answers”.

Some, such as the Wall Street Journal, say the choice is a surprise, since president Robert Lloyd was considered the front-runner.

Given the intense interest in the succession - since Chambers is one of the valley's highest-profile executives - and perhaps to forestall criticism of the choice, Cisco has published an extensive blog post about the selection process. ®

Top tip, everyone: Chinese hackers are hitting these 25 vulns, so make sure you patch them ASAP, says NSA

Plus this Chrome one being exploited in the wild, we note