Docker vs the container world: Techies rally around CoreOS-led spec

The big D is still going its own way

One thing the speakers gathered at the event seemed to agree on, however, is that the next step for containerization should be for the industry to collaborate on a formalized container standard that can be used as the basis for multiple software implementations, rather than just accepting Docker as a de facto standard.

"You have to write down the spec in order for people to figure out whether they agree or not," said CoreOS CTO Brandon Philips. "Having code is great. It's a place to start. But it's easier to argue about specifications, and specifications and code at the same time."

Google's Hockins agreed. "I'm interested in building the cathedral," he said, "but before you build the cathedral you have to pour the foundation. I think something like appc is very foundational to the whole ecosystem. If you don't have a solid spec and a solid understanding of what you can expect inside and outside the container, the whole cathedral will fall down." 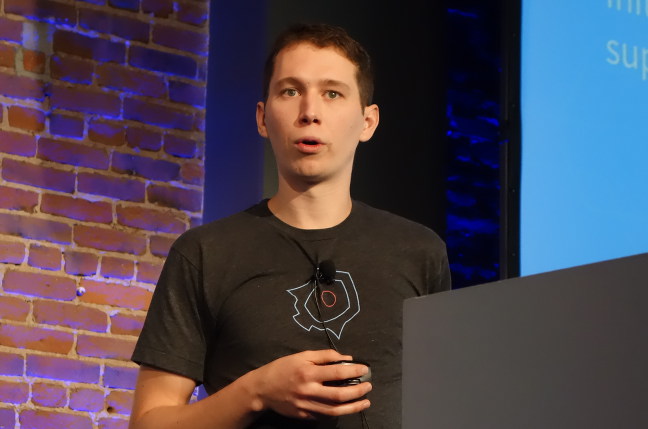 Twitter's Aylworth added that one of the things that attracted his team to rkt and App Container was that CoreOS thinks of container support in terms of small, purpose-built components. Implementers can choose to use all of a given vendor's components together or swap out some for alternatives.

"In looking at some of the existing, off-the-shelf stuff that we could use, they were very tightly integrated small packages," Aylworth said, though he didn't name Docker specifically. "[We liked] the idea that we could make something that would be a little bit more composable and we didn't have to take something wholesale."

Similarly, one of Polvi's initial criticisms of Docker was that the company's strategy seems to be to add ever more features to its monolithic core software, rather than breaking up functions into separate, re-usable components.

Mind you, none of this is to say that the industry as a whole appears to be turning away from Docker; far from it. The firm recently scored a whopping $95m in Series D funding from a pool of investors including Insight Venture Partners and Goldman Sachs – funds that CEO Ben Golub said should keep Docker humming for several years to come.

CoreOS has bagged some funding recently, too. But its latest $12m financing round, led by the Chocolate Factory's Google Ventures arm, was dwarfed by Docker's latest haul.

Still, the people onstage at CoreOS Fest were engineers, not business wizards. And if their sentiments were any indication, there may soon come a time when Docker can only ignore the App Container specification effort at its peril.

As Twitter's Aylworth said, "I think in six months or a year, what would be a great success [for App Container] would be that since you have a well-defined spec, what you do first and foremost is you generate an App Container image, and then you can translate that into other formats that you might already have for legacy reasons." ®