Merging HP and EMC – hold on, wait, hear us out. The cap is still on the bottle of crazy pills

Looking at the possibilities

Comment Does an EMC-HP merger make more sense now than last year when the two titans' inability to agree on a price put a stop to the idea?

HP could join the EMC Federation as a servers-and-networking business, and stand alongside EMC II (EMC Information Infrastructure, aka storage), VMware (virtual server software), and Pivotal (big-data analytics software). Seen in that light, HP is a great fit as the federation cannot be a comprehensive data center supplier presently – it is missing servers and networking.

HP would also bring its Enterprise Services arm, which complements what the federation offers, plus HP Labs, which is working on memristors and The Machine – HP's computer-of-the-future project. And EMC’s security biz RSA could have potential with HP accounts. 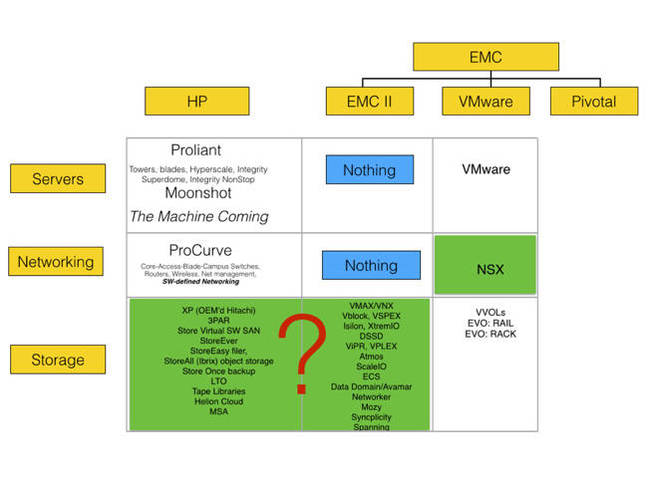 A big problem is HP Storage, and what do about that given EMC's array empire. HP Storage head, and ex-3PAR CEO, David Scott has retired, and ex-EMC exec David Donatelli is leaving HP to join Oracle, which removes two potential internal obstacles to a merger on HP's side.

EMC has also effectively bought out Cisco’s interest in VCE – that's the business building Vblocks, which are converged systems using VMware software, EMC storage, and Cisco servers and networking. This leaves a nice gap for HP to squeeze into. The shift from Cisco happened a week after the previous EMC-HP talks emerged in public.

A merger will probably receive enthusiastic backing from Elliot Management, the activist investor pushing for EMC to raise its shareholder value. EMC is under pressure from Elliot to sell off VMware.

With HP splitting itself into HP Enterprise, and a PCs and printers business called HP Inc, HP CEO Meg Whitman will become boss of HP Enterprise. Its valuation will be less than that of the current HP, which today stands at $59.92bn. EMC is capped at $59.2bn.

We could crudely see HP Enterprise being worth half of the current HP; roughly $15bn. That ought to make valuation less of a problem in any merger talks. 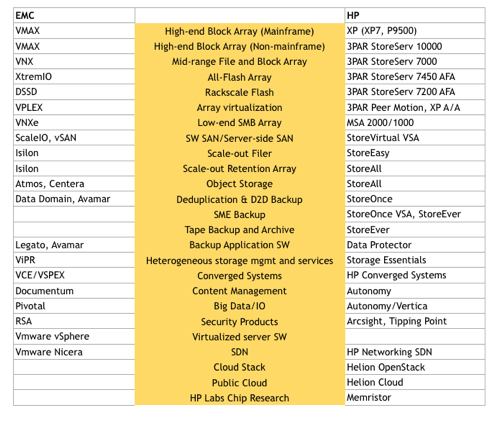 EMC and HP storage and some other product overlaps

If HP agreed that EMC storage took primacy, and that the overlapping product line problem would be resolved by migrating HP customers to EMC products over time, then this becomes a manageable problem.

Where there is a partial or no overlap, then HP gear, such as the tape libraries and Helion cloud, could simply stay on as separate products and integrate with relevant EMC kit over time. This would seem to be a workable framework if EMC and HP execs support it and make it happen.

Next page: Who would go where, and what will be paired with hot topics like HP's Autonomy?
Page: