The good ship Imation is like a World War Two submarine facing attack, with the captain yelling out "Dive! Dive! Dive!" - because diving is what all its revenues are doing.

This was ascribed to a decline of $23.5 million in the legacy Consumer Storage Media business and unhelpful foreign currency exchange rates.

There's a time for a CEO to report continuing bad news and two weeks before the May 20 AGM where a proxy vote war could cause you to lose your job is not it.

Poor Mark Lucas, Imation's CEO, put his best foot forward, and a pretty shabby looking piece of footware it was: "We are highly encouraged that our efforts to transform Imation into a global leader in data storage and security are working as demonstrated by the greater than 20 per cent revenue growth in our combined Nexsan [storage array] and IronKey portfolios."

Compared to the huge continuing fall in tape and optical media sales the Nexsan array revenue rise is trivial; look at the revenue chart. 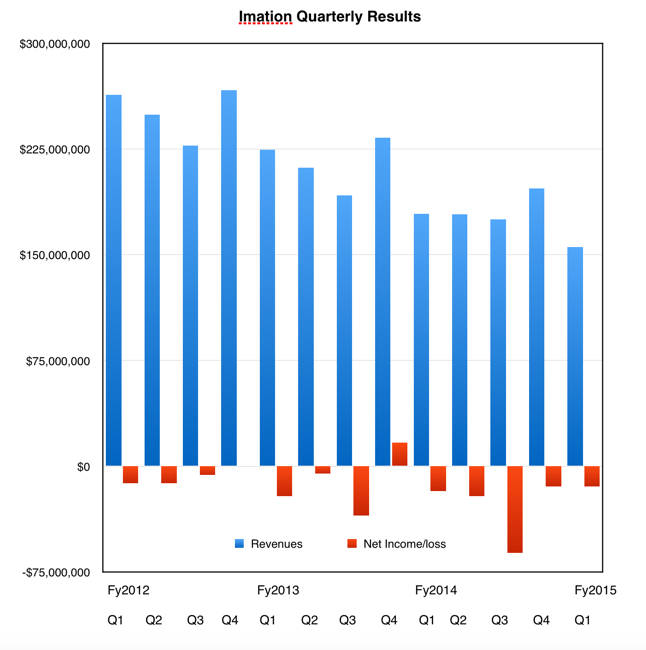 Nexsan revenues have not grown as a result, giving Imation no growth counter-balance to its loss-making products. The hapless Imation board and execs are now under attack from activist investor The Clinton Group, which wants to take over the firm and sell it or its bits.

Meanwhile, no one is thinking of the horrible emissions coming out of all these rockets, say scientists
Science6 Feb 2023 | 10