Why MakerBot failed – but 3D printing is far from dead

Trying to be too clever for its own good?

Collision 2015 3D printing posterchild MakerBot moved too fast with untested technology and that's why it was forced to cut 20 per cent of its staff, abolish three divisions and closed three shops.

That's according to another 3D printing company whose CEO we spoke to at the Collision conference in Las Vegas this week. Matthew Fiedler of re:3D designed and was displaying his massive Gigabot printer.

"It's a real shame what has happened to MakerBot," he told us, "they are a great company. But they tried to make the key part of the printer too smart, and then they rolled it out to every printer."

The most important component on any 3D printer is the head, Fiedler said. MakerBot rolled out a new head without doing proper testing, he claimed, and that led directly to its appalling 10 per cent customer approval rating. If the printer head doesn't work, the product doesn't work, he said.

In contrast, Fiedler says his focus has been on making a 3D printer that is extremely sturdy and robust, sometimes at the expense of being on top of the latest advances.

"I took this printer, packed it up, stuck it in a car and drove it from Texas," he told us. "I got here, set it up and it started printing right away."

Of course, re:3D is going for a different market to MakerBot. The Gigabot is industrial quality, prints products up to two feet high and starts at $6,000 ($9,000 is you want it installed and tested). The MakerBot aims at the enthusiastic amateur with its $3,000 desktop Replicator that can create products six inches high.

Whether it's possible to create a quality 3D printer at the price point that MakerBot aims for, one that is able to provide the reliability that would expect from something that costs $3,000, is now up for debate. Did it move too fast or did it make too many cost compromises and lose quality?

As to whether the 3D printing is a passing fad, Fiedler is, of course, firmly of the view that there is a bright future in the technology. He admits that most customers still use his printers to create quick prototypes rather than full-blown products, but says that more materials are coming down the pipeline that will lend greater strength and performance - making it possible to develop finished products straight from a printer. 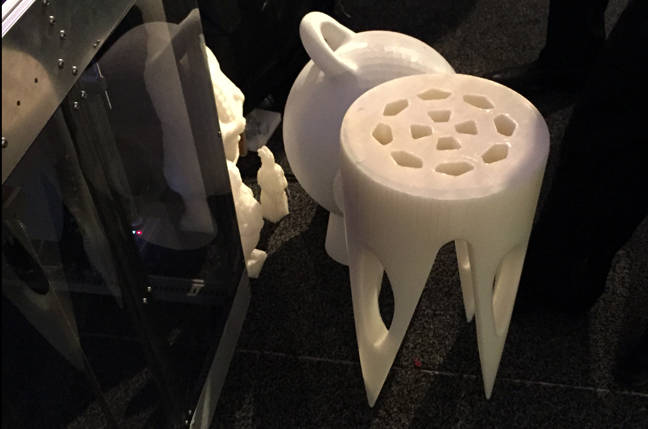 He points to a chair printed on the machine earlier that day which he encourages every passing conference attendee to sit on in order to demonstrate its strength and stability.

It is strong. And stable. And an interesting design. But, as with many 3D printed items, it's also a little granular and the color seems odd. For now at least, 3D printers remain a fantastically fast and cheap way of prototyping. But you're only going to find finished products on Etsy. ®