Jupiter's moon Europa isn't the place for a Curiosity-style rover, since under its icy crust it may well have liquid oceans, so NASA's slung some money towards developing a robot eel concept.

The robot, funded as one of a bunch of advanced concepts to get Phase 1 funding under NASA's Innovative Advanced Concepts program, which awards US$100,000 to help researchers prepare feasibility studies for their concepts.

The “robot eel” rover, described here, is considered by its proposer, Cornell University's Mason Peck to be more like a squid:

“This rover resembles a squid, with tentacle-like structures that serve both as electrodynamic tethers to harvest power from locally changing magnetic fields and as a means of bio-inspired propulsion.”

If the tethers can harvest enough electricity, the “soft-robotic rover” would use it to power its electronics and an onboard electrolysis pack. By separating water into oxygen and hydrogen, Peck explains, you get something to burn for movement:

“Igniting this gas expands these internal chambers, causing shape change to propel the rover through fluid or perhaps along the surface of a planetary body.” 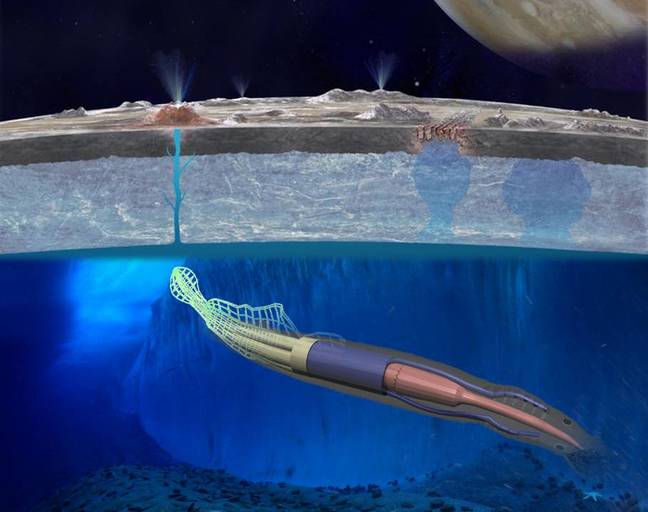 Other NIAC Phase I awards, listed in full here, propose directed energy propulsion (instead of that messy stuff involving firing atoms out a rocket's rear end), in-space propellant manufacture, sending seismometers into space to investigate asteroids, and mining asteroids for water (because lifting water from Earth to space for astronauts is expensive).

Applicants that get through the Phase I process can apply for a further US$500,000 to extend their concept development for another two years. ®

Last one standing after Boeing's 2019 bail