Door keys are an option. It's just a matter of time

IoT World 2015 "In order for any internet of things hardware manufacturer to survive, we can't sell hundreds of thousands of units, we have to sell millions," says Jason Johnson, CEO of smart-lock manufacturer August.

After years of talking about the "internet of things", this year CES decided 2015 was actually the year of the internet of things. And so we came to the Internet of Things World conference in San Francisco this week to find out what we can expect to be introducing into our homes in the next seven months.

And we found the big names in the industry wondering less about the products than how to drive adoption.

At a "Leaders Panel" main session, CTO of Belkin (and so Linksys and new IoT offshoot WeMo) Brian Van Harlington, Johnson, and Verizon's chief data scientist Ashok Srivastava, all wondered and worried about how this technology actually gets into homes.

At the moment, there is a roughly a five per cent adoption of IoT products, the panel was told (if anything, a generous number), how do we get to the next 15 per cent?

Simplication, says Van Harlington. "Simplicity out of complexity is what we need. At the moment the people buying are early adopters, people who know exactly what they are looking for. We have to unlock the value from the data."

There is no shortage of companies at the conference aiming to do just that with new analytics engines. But Johnson also highlights two other factors: distribution and addressing concerns over security and privacy.

"People learn about these products from word of mouth or from a service provider," Johnson argues. Which is why his company has signed up with Comcast: soon Comcast's installation guys will be driving around with August locks in multiple colors and offering them to people.

"Comcast has 25 million customers," Johnson tells The Register after the session. (We covered the Comcast-August tie-in when it was announced last week and were less than excited about the idea of renting our door lock from a cable provider.) 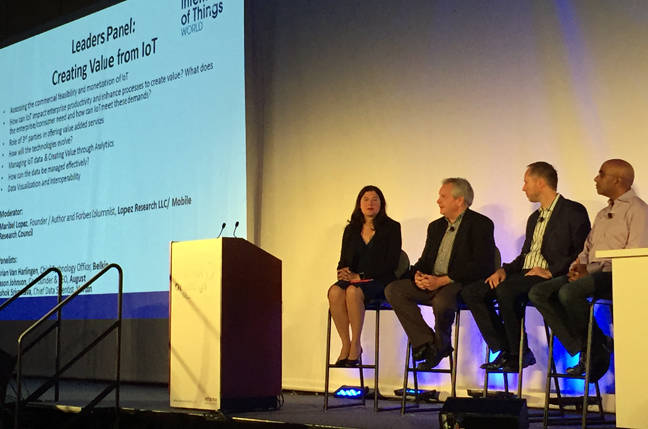 Having a cable company rep be able to install a smart-tech device then and there also overcomes another major hurdle: letting people test the technology out. And it is here that Johnson - and the other panelists - appear convinced that if only people try it, they will like it.

"On any new car keys are now an option," Johnson tells us. "And in any company with more than 20 or 30 people, they are going to have a keycard." He also highlights the fact that all houseowners at some point end up giving a copy of the key to the house to someone else. "And no one knows if they have made a copy."

In that sense, in Johnson's mind at least, the adoption of smart-locks is "just a matter of time."

And that leads us to the two constantly quoted concerns with smart-tech from consumers: privacy and security. This is especially apparent in something like a lock to your house.

One of the August lock's biggest complaints - and something that puts a lot of people off buying one - is that it has a dangerous tendency to auto-unlock when it shouldn't. Or, in other words, fulfill everyone's worst fears about trying in technology to something as critical as the door to your house. We ask Johnson about it.

"So, yes. We spoke to those that had this problem and went through the logs. The problem we found was that the auto unlocking was using a geo-fence of 100 meters. So sometimes if someone walked from one end of their house to the other, their cellphone would jump from one cell tower to another and cross that geo-fence."

In other words, the doorlock could be convinced that someone had just left their house and appeared several hundred meters away, and vice versa. The answer to the problem was two-fold. "We changed the size of the geo-fence and we also added a velocity component," explains Johnson.

The velocity aspect accounts for the fact that people are physically incapable of travelling hundreds of meters in milliseconds. Since those changes there hasn't been a single complaint about mysterious unlocking, claims Johnson.

But what about privacy? When you leave the house and arrive back is a hugely valuable and potentially dangerous piece of information, for obvious reasons. If there is one thing everyone can agree on it’s that they aren't comfortable with companies knowing when they are home and when they are not.

On stage, Johnson talked vaguely about the need to respect privacy and being extremely aware of how sensitive the data they hold is, so we pushed him on the details.

"So we've had around 200-300 companies ask to integrate with us. The only one we've gone with so far is Nest - and we require an explicit agreement from the user for that to happen," he tells us. "We decided to take a step back to think through how to provide this information."

And how it is thinking that through? "We have hired two of the best consultants out there: the guy who was literally the author of OAuth and one of the best security firms out there."

And while this approach may make sense to August as a company with millions of dollars in funding and seeking to protect its intellectual property and current market position, it does highlight the big gap in the internet of things right now: open policy making and industry standards.

The IoT world is too small and fluid right now for the industry to come together on critical policy issues. Instead, we have the hodge-podge of different guidelines and internal practices specific to each individual company: a model that fits well with the Silicon Valley mindset from where much of these new technology is coming.

But here's the thing: as annoyed as everyone gets when Facebook changes its privacy policies, or when Google decides what it can do with your data, neither of them touch the physical world and your real-world presence.

From looking around at IoT World this morning, the technology is coming, the analytics are coming, the technical platforms are coming but there remains a huge and dangerous hole in the middle of it. As unsexy as it is, the biggest barrier to adoption for smart-tech is easily understandable and industry-wide policies.