Scale Computing: Not for enterprise, but that's all part of the plan

In order to use these workloads on Scale I needed to migrate them from VMware and Hyper-V to KVM. The UI doesn't explain things very well, but there's an import button. I mashed it, fed it a copy of my VMs and tried to import. It churned for a while, but no dice. Scale informs me it is designed only to import .qcow2 formatted VMs.

In order to import my VMs I need to use V2V software. Now, Scale offers this as a service to its customers, but I'm a stubborn git and insisted on doing it myself.

Scale recommends Acronis for Linux workloads. For CentOS 6 and Fedora 12 Acronis worked just fine. Better than fine, actually, as it allowed me to expand the virtual hard disks on import. There was the usual faffing about with udev networking after the conversion, but if I'm being honest I should have set up VMs to not have that problem from the start. It's not hard, I'm just lazy. 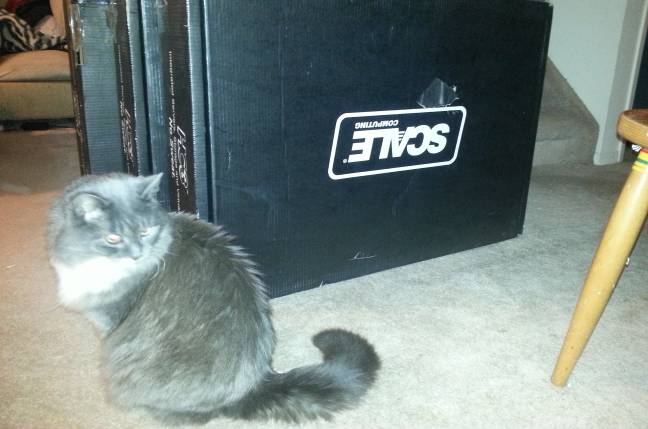 Server? What server? It's a kitty! The kitty is named Paradox

Acronis is pretty straightforward. You turn your VM off, boot off the Acronis .iso and save a copy of the VM somewhere on your network. You then boot up the Acronis .iso in a blank VM on the destination server and import the copy. Easy peasy: it even handles driver injection for KVM.

Fedora 10 flat out didn't work. I didn't try Acronis with any of the Windows workloads, as Scale informed me they tend to use Double-Take Move. I wanted to do things just like any other customer would, so that's what I chose.

Double-Take Move is completely different. To make this work you need to have a "built" VM on the destination, but the target does not have to be the same as the source. In my case I had Server 2003 on my source and I wanted to not only move from VMware to KVM, I wanted to move from Server 2003 to Server 2008 R2.

I built a Server 2008 R2 VM on the Scale cluster, loaded the software on both VMs and told A to Sync to B. A few minutes later, success! I now had both VMs running in lock step. All the services that were set up on the Server 2003 VM (DHCP, DNS, etc) were installed and configured on the Server 2008 R2 VM. Cross hypervisor and cross OS. I flipped workloads over with zero downtime. Pretty slick.

Sadly, Double-Take doesn't work on client OSes. It took a few frustrating hours to realise that, as Double-Take will install on Windows 7, but it will absolutely refuse to migrate it. I don't know what Scale's solution to this is. Mine was just to rebuild my Win 7 VMs from scratch, as I was tired of learning new V2V software.

With workloads moved I was now committed. All my production workloads are now running on this utterly foreign KVM cluster with a custom UI. I've bet my business on Scale's absurdly positive reputation amongst my SMB peers. It's time to learn how to use the smeggling thing.

Learning to use every single feature Scale offers took all of about 5 minutes.

In part this is because there aren't a lot of features. You can create new VMs, take snapshots, make clones, migrate VMs and do imports and exports. You can load ISOs into the cluster's library, change e-mail settings for alerting and send VMs back and forth to remote clusters – think cross-cluster WAN/stretch vMotion.

You can add virtual optical drives, hard disks and NICs to VMs, though if we're being honest I haven't figured out how to remove them. You can rename VMs (but you can't use spaces) and you can send your snapshots to a remote cluster – think automated back-up to a public/hybrid cloud provider.

Everything your average SMB user wants out of their hyper-converged appliance is there. The interface takes a few minutes to adjust to, and it has some quirks, but it's intuitive enough that I think most administrators will adjust very easily.

There doesn't appear to be anything like DRS. Scale will not move VMs around if you unbalance your cluster. There's also no RAM deduplication, so size your VMs wisely. There is thin provisioning, so don't worry about hard drive space.

While the interface is reasonably intuitive, I'm not a fan of pictographs for everything. Perhaps it's my vSphere bias showing, but I prefer the whole "text menu" approach. Its fine as it is, but I am hoping that Scale will start to expand the features on offer. As it does so, I question whether the current pictographic approach will continue to be viable.

The only other complaint I have to level about the user experience is that I would far prefer to have my VMs listed similarly to the "details" view type in Windows Explorer, not the tiles that Scale currently uses. From a UI standpoint, I think OpenNebula is closer to my preference.