BONKERS The insane vehicles of Mad Max Fury Road cruised past Vulture South When the Vulture South team popped out for lunch today, members of the local constabulary directed us away from our usual haunts.

The reason? A promo for the new flick Mad Max: Fury Road had rolled into the nearby Sydney Opera House. Roads were blocked. Film luvvies watched as odd vehicles rolled past. And Vulture South was cut off from a little bit of Sydney.

For the uninitiated, the Mad Max films take place in a post-apocalyptic Australia in which gangs of deranged maniacs roam the desert, battling in fearsomely customised vehicles. Director and creator George Miller spent years trying to get this instalment of the saga made, twice having to abandon filming because the deserts he picked as a location experienced unseasonal rain that made them insufficiently bleak.

The production eventually moved to Namibia, where the deserts are reliably horrid.

Mad Max 2, or "The Road Warrior" made Mel Gibson a star and influenced oodles of subsequent movies. So with the chance to check out the new flick and ensure Vulture South was not surrounded by madmen in war wagons, we trousered our phonecam in our pockets, hoped the low light wouldn't make pics too horrid, and went off to behold the hardware.

Vulture South's office at top left in the red circle. War wagons below. See, boss? We were in danger and needed to manage risk. Or something.

The cars on offer included the “F350” below, which packs a harpoon and a pair of “teeth” with which it “bites” into other vehicles. 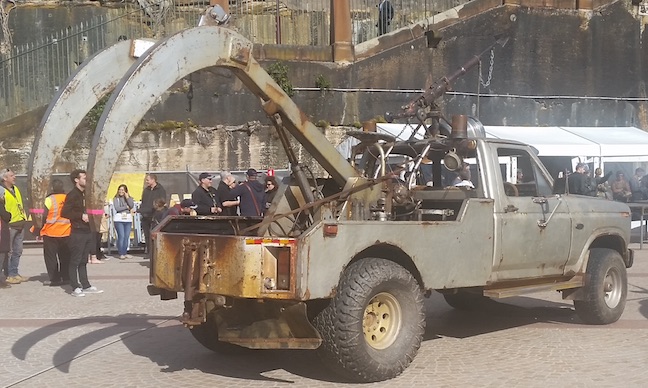 Try reverse parking with these onboard

The F350 is pretty tame compared to the “Gigahorse”, pictured below. We're told there's a pair of V8 engines inside there somewhere, beneath the two 1959 Cadillac De Villes, and with a custom gearbox making it all go forward. 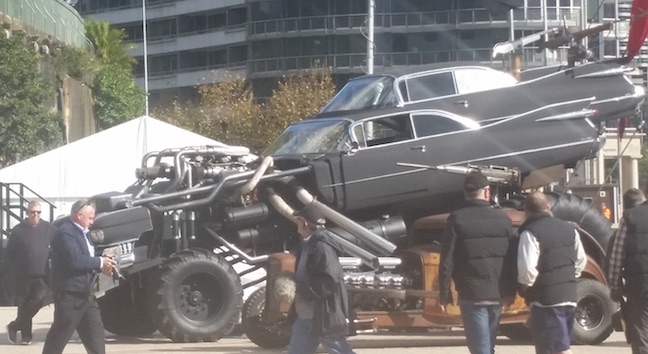 One of the odder features of the Mad Max universe is that despite the world being out of petrol, water and manners, the inhabitants still bother to put resources into customising vehicles for no good reason. That odd survival decision is on show in the “Duffwagon”, which possesses two enormous speaker stacks. Check out the long tunnel-like structure on the right: it was lifted in place by crane and attached the Duffwagon's chassis. There's also a nice set of drums on the wagon's rear. Apparently a demented chap beats them as the wagon goes into battle. 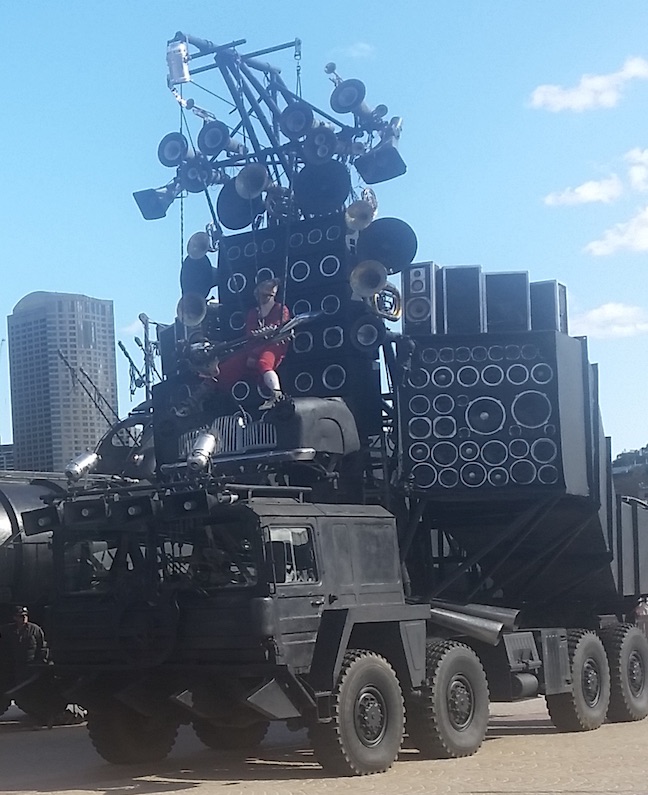 You can get another look at the Duffwagon in the shot below, behind something called “The Nux Car”. This Deuce Coupe boasts a nitrous-assisted engine. Which sounds like a gas. 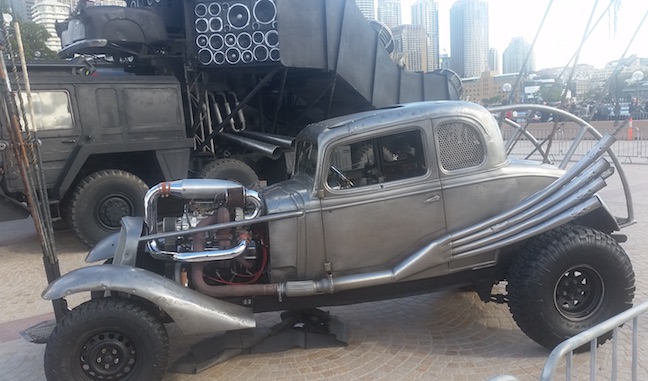