NASA might have canned its Sunjammer project, but that doesn't mean lightsail research is dead: a Planetary Society Kickstarter fronted by famous American “Science Guy” Bill Nye has hit its target and will go ahead.

This will be followed by a full-fledged demonstration next year.

The LightSail concept is well known to any science fiction reader: photons, in this case from the sun, transfer some of their momentum to the sail when they reflect off it. That imparts a very small acceleration to the sail.

However, unlike lighting a Bloody Big FirecrackerTM, the Sun doesn't run out – so in theory, a solar sail-powered craft should be able to achieve higher speeds over time than we can get with chemical rockets.

The LightSail is three 10 cm per side CubeSats stacked together, packing in the solar arrays. As the Planetary Society describes, when it's in space: “Four tape measure-like metal booms slowly unwind from storage, unfolding four triangular, Mylar sails. Each sail is just 4.5 microns thick—one-fourth the thickness of an average trash bag.”

On the Kickstarter page, Nye explains that giving CubeSats propulsion without chemicals will open up space for low-cost citizen projects – “projects like ours or by teams of students and faculty at universities”.

The prototype to be launched this month will be on a 30-day orbital mission. The launch will be streamed here. 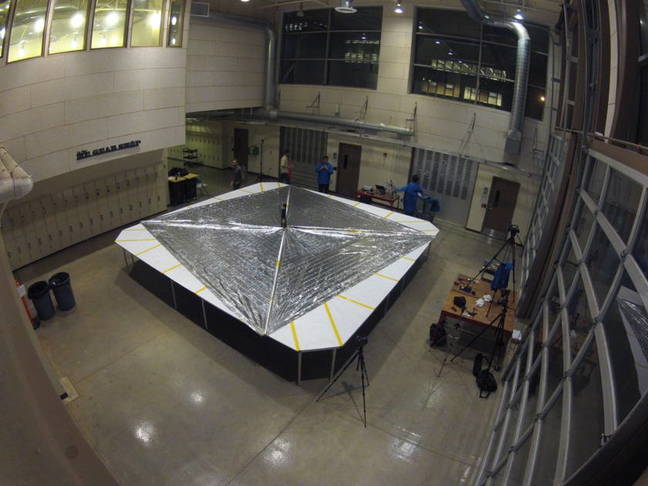 A lot of sail in a little package: the Planetary Society's LightSail

It won't be the first time the solar sail effect has been tested. For example, there was NASA's NanoSail-D which spent 240 days in low earth orbit, deorbiting in September 2011. NASA noted at the time that a change in solar flare activity at the time was observed in the drag on the satellite.

The Kickstarter campaign runs until June 26, with stretch goals all the way to $1 million for things like engineering support, data analysis and public awareness campaigns.

Not a lot of people know this: NASA used the solar sail effect in its Messenger Mercury mission. ®

Don't mind us, we'll just have a quick look for unsupported installs and then disappear, we pwoooomise
Software3 Feb 2023 | 7