Baffled astronomers at the Keck Observatory in Hawaii are scratching their heads after finding a group of four quasars, a gathering that current cosmological thinking rates as a ten million-to-one chance of occurring. 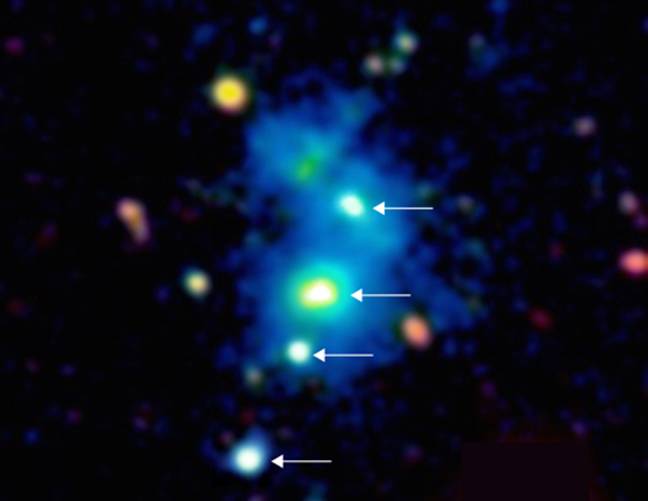 Four into one shouldn't go

"If you discover something which, according to current scientific wisdom should be extremely improbable, you can come to one of two conclusions: either you just got very lucky, or you need to modify your theory," said Joseph Hennawi of the Max Planck Institute for Astronomy. "Extremely rare events have the power to overturn long-standing theories."

Quasi-stellar-objects, or quasars, are thought to be extremely rare phenomena that occur when enough matter falls into the accretion disc around a supermassive black hole to generate enormous energy.

The four newly discovered quasars were spotted around 10 billion light years away in a giant nebula of cool, dense hydrogen gas that has been irradiated by its quartet of high-energy inhabitants. The whole group is part of an unusually large galactic cluster that caught astronomers' attention.

"There are several hundred times more galaxies in this region than you would expect to see at these distances," said prof Xavier Prochaska of the University of California Santa Cruz.

One possible explanation is that the quasars formed when two galaxies collided a few billion years after the Big Bang. It's thought that the resultant matter could fuel black holes and lead to the quasar signals, but more research is needed. ®