Stripped to the core and full of Xfce: Xubuntu Linux loses it

Review The Xubuntu project recent unveiled a stripped-down build of its Xfce-based Ubuntu: Xubuntu core. Core offers a very basic version of the Xfce desktop, along with the basic look and feel of Xubuntu, but any extras like an office suite, media player, Xfce add-ons or even a web browser will have to be installed separately.

The "core" name is a little confusing since Ubuntu proper recently began shipping Ubuntu Core, a lightweight version of Ubuntu optimized for container-based environments like Docker. Xubuntu core is unrelated and derived from Xubuntu, not Ubuntu Core.

Xubuntu core is also not, like many distros using words like "core,” aimed at the server or Docker instances. Xubuntu core remains focused on the desktop, but wants to deliver a lightweight desktop ready for customization, rather than a complete, ready-to-use desktop like Xubuntu proper.

By the time Xubuntu 15.10 rolls later this year the project will have official release ISOs for core, but in the mean time if you'd like to try Xubuntu you'll need to start with Ubuntu's minimal install CD (the mini.iso you can download).

When prompted, install the Xubuntu minimal installation task. Alternately, you can grab one of the unofficial builds that were put together by a Xubuntu community member.

Why install Xubuntu core? There's the obvious benefit of a smaller download that fits on a CD (the unofficial builds are just over 600MB, compared to around 960MB for the full Xubuntu), which is a big win for anyone with limited bandwidth. The other likely fans of Xubuntu core are those who don't use the stock Xubuntu apps and want to customize everything exactly to their liking.

The core version of Xubuntu will also be welcome news for anyone interested in a very minimal Linux that’s reasonably light on the resources and that still packs the user-friendliness and hardware compatibility of Ubuntu. For example, if you're a fan of Xfce and also like the well-stocked Ubuntu repos, but don't like the everything-and-the-kitchen-sink approach of Xubuntu, then the new core version will be exactly what you're looking for.

The core spin of Xubuntu is considerably snappier and less resource hungry out of the box. After installing from the unofficial, community image, I started up Xubuntu core and found it used 417MB of RAM. That's pretty good compared to the main Xubuntu install, which uses more than 580MB and certainly great next to Ubuntu with Unity, which uses 770MB of RAM just idling.

To be fair Xubuntu core doesn't offer some of the niceties of Xubuntu, the theme is minimal and there's not much beyond stock Xfce. This is not a good choice for the terminally squeamish; out of the box there's no software center, while all updates and new applications need to be installed through apt-get or the like in your terminal. Curiously, the software configuration app is included so you can add and remove repos in a GUI, but not applications.

Similarly confusing for those used to a little more hand holding, there are no default applications installed to launch when selecting items from the Xfce main menu. For instance, there's a menu item for "Web Browser," but clicking it will just bring up a menu asking you to pick a default application (which, of course, is not installed). None of these things are particularly difficult problems, but it does mean you'll want to make a trip to the terminal to install some software before Xubuntu core is really ready to go.

In that sense Xubuntu core qualifies as a minimalist desktop. Certainly within the extended Ubuntu family Xubuntu core is one of the smallest and lightest. 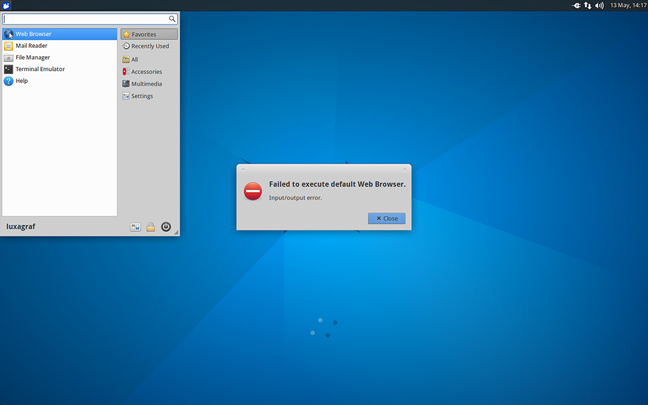 At the same time, fans of truly minimalist desktops like the Openbox-based Crunchbang - alas, gone the way of the Dodo (though there is Crunchbang++) - or bare-bones distros like Arch won't be impressed. As a Crunchbang user and minimalist desktop fan I must admit I've been searching for a replacement and, while Xubuntu core is a very nice distro and would be my top pick out of the Ubuntu family (along with Lubuntu), it still really barely qualifies as a minimalist desktop.

Similarly, the download size is bested within the Ubuntu family only by Ubuntu's mini.iso (which is small because it downloads everything during the actual installation), but it's still pretty good size compared to Crunchbang. It's actually very close to what you'll get if you use install Debian with Xfce, but of course you get the far more up-to-date Ubuntu repos.