Are we looking at the first domain name meme? Neigh

Satirists hoof it over to .horse

There have been widely varying views over the value of introducing thousands of new internet extensions: some feel it is a long-needed reflection of the actual internet; others that it is a money-grabbing scheme with little real value.

But one thing that even the domain name industry has agreed on is that some of the new dot-words are not exactly new markets waiting to burst out. And one in particular – '.horse' – has become shorthand for people pondering how sustainable some of the new internet registries truly are.

In the past few weeks, a number of amusing, bizarre, and satirical websites have started appearing on dot-horse: a registry that currently boasts just over 1,800 domains and whose stated purpose is to "offer horse owners, breeders, dressage enthusiasts, horse veterinarians, professional riders, and all other participants in the equine eco-system the opportunity to brand themselves or their services".

Well it looks as though the "equine eco-system" has a new stakeholder group willing to splash out $40 a year to cock the snook with a new internet meme.

Take for example 'endless.horse' which features a majestic beast carefully drawn using keyboards symbols who happens to have very, very long legs. The site encourages you to scroll down to get to the horse's feet but guess what? It's not called Endless Horse for nothing. 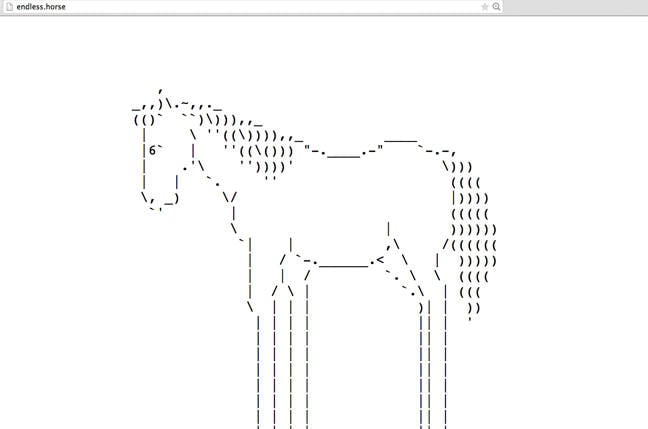 Of course nothing says "internet" and "horse" like a cat. Particularly one falling over. Which can enjoy in glorious Repeati-color at 'spoon.horse'. And if you were left in any doubt over the owner's feeling about the four-hoofed extension up the top you can find the message:

Welcome to spoon.horse .horse is a stupid TLD ain't it. 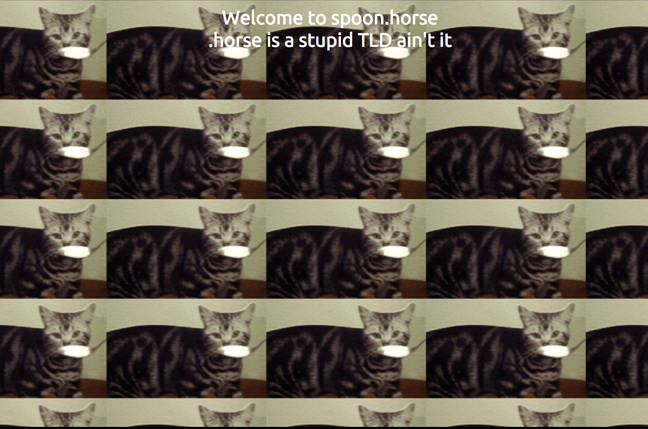 But then we start entering the dot-horses that people have put seriously thought into. And here, one stands out: hillaryclinton.horse.

The website, owned by one Sarah Mendenhall who claims to live in the Clinton's hometown of Little Rock, Arkansas, features an extraordinary pastiche of Hillary and Bill Clinton with Hillary hanging out with a goofy cartoon horse while Bill sprays passers-by with an Uzi and a saxophone strapped on his back.

The site even has its own logo – HCH with a wreath – standing for Hillary Clinton Horse.

Next up, we have a satire on celebrities and domain names at 'taylorswift.horse'. As you may or may not know, our Taylor's people have gone all out on protecting her name online, including grabbing 'taylorswift.sucks', 'taylorswift.porn' and, we swear this is true, 'ITaughtTaylorSwiftHowToGiveHead.com'.

This is from a legal team that has also trademark some of her lyrics and song names because, you know, they contain such extraordinary insights in the human condition that they need to be legally protected.

Meanwhile, over at TaylorSwift.horse, we have the songstress standing on top of a horse with the meme-like block text declaring "I'm on a horse". 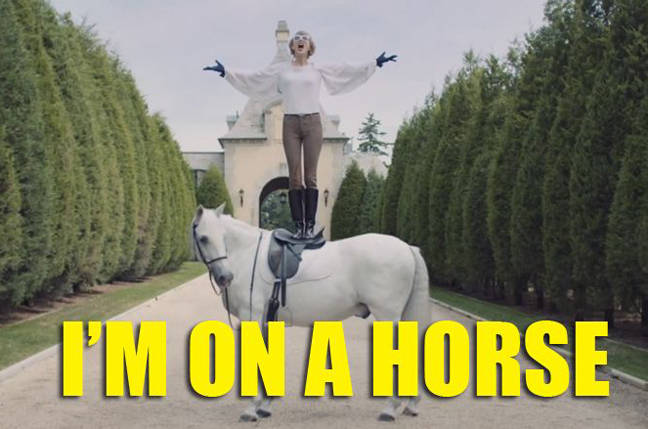 Taylor's legal team will be right on that one, using the Uniform Dispute Resolution Process (UDRP) to shut it down. But, wait, someone has got there before them.

Yes, ladies and gentlement, Walmart has taken the owner of 'walmart.horse' to the World Intellectual Property Organization (WIPO) to demand its return (case D2015-0714).

Originally the megastore had sent Jeph Jacques a cease-and-desist letter for his domain - which feature a picture of a horse superimposed onto a picture of a Walmart store and nothing else. Jacques refused, citing fair use. Walmart responded by going to WIPO and claiming "bad faith". Jacques decided not to bother fighting and handed the domain over. 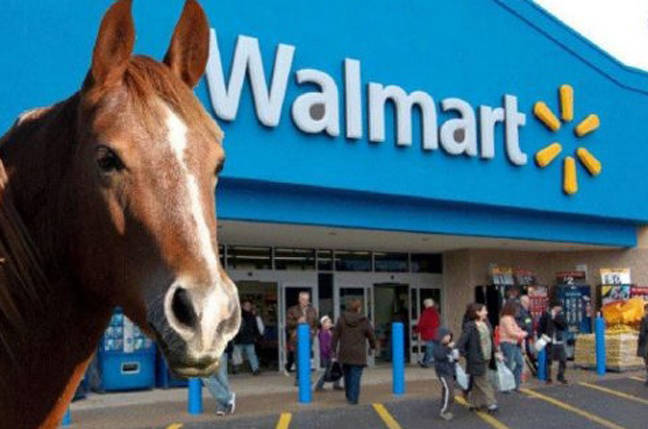 But that it seems it just one lost battle in a greater war for an entire internet namespace whose main use would appear to be creating a new meme.

Quick fact: did you know there are 9.2 million horses in the United States alone, or roughly 3 horses per hundred people. Or that the horse industry contains 416,000 jobs and is worth $39bn? Well now you do. ®