Witcher 3: Wild Hunt – a true monster in the making

It started with a kiss

Every quest has a consequence and no good deed will go unpunished. Even side quests are designed to tweak my emotions, and have as much thought and conviction behind them. 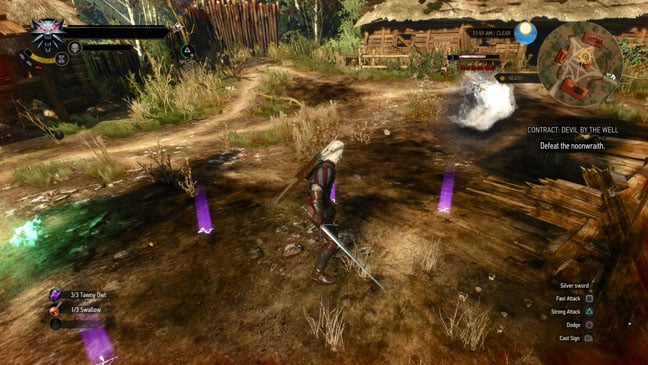 Defeat the Noonwraith... as you do

Monster contracts can be picked up from noticeboards, these also highlight points on my map that I might want to head towards, but I need to be prepared for anything, as I could be travelling towards a bandit camp or a shockingly high-level beastie.

This embeds the game with an incredible sense of exploration and discovery in a vast rich interactive landscape. I’m constantly mounting horses (my horse Roach unfortunately doesn’t possess the ability to skin up), boarding boats and climbing mountains. This is where the bugs pop up: if there’s the slightest niggle about this game it’s that I can be jolted from my reverie by Roach getting caught on a wall. 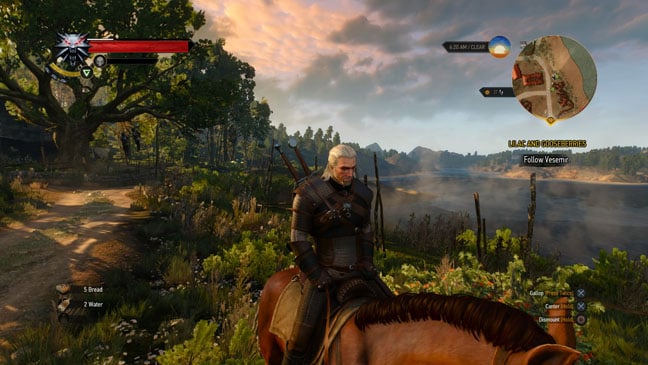 A new feature in Witcher 3 is the ability investigate areas with my Witcher senses for tracks and clues that will lead me like a bloodhound to whichever monster might be responsible for the crime scene I have stumbled upon. These heightened senses also allow me to spot hidden loot and passages.

As a massive Hearthstone fan, I was keen to participate in the in-game collectable card game Gwent that led to its own unique quest line. Unfortunately, it isn’t as pretty as Blizzard’s addictive game. 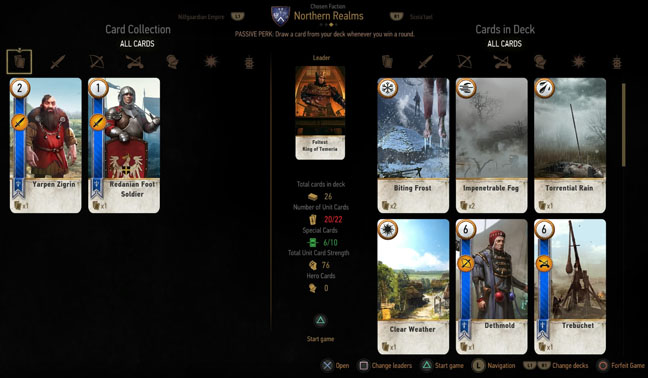 But this isn’t a story about saving the world, this is an emotional journey to re-establish relationships with the people Gerhalt (who is the voice doppelganger of Cornfed the pig from Duckman, go on take a listen) cares most about, and that gives the game maturity and depth rarely seen on other titles.

The wealth of characters and their usually hidden motives were enough to keep my mind racing long after bedtime. Or maybe it’s the stunning facial animations that give weight to any human interaction. The many scarred and brutalised mugs are complemented by almost too convincing gestures and expressions. 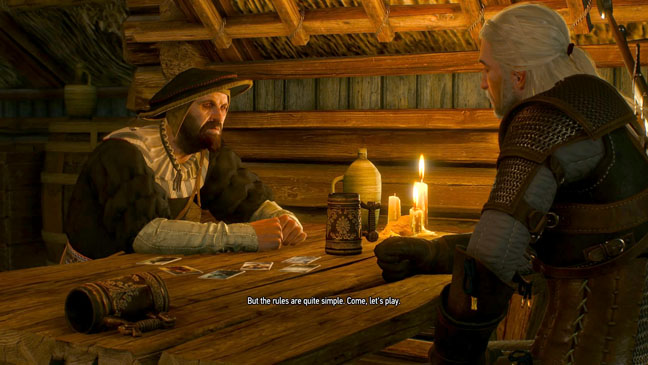 "And the first to say 'Snap' is the winner"

Choosing the difficulty setting of Blood and Broken Bones, rather than Death March, I was already aware that combat relies heavily on my adaptability. Even so, it is at turns challenging and rewarding and somewhat easier to get to grips with than the last Witcher. To parry and dodge while waiting for an opening is essential.

Next page: Brewing up trouble
Page: