US Air Force reveals what's inside its top-secret space plane, this time

The US Air Force has responded to fears that it is weaponizing space through its secret space shuttle by providing some details of what it will contain at launch on Wednesday.

The now not-so-secret X-37B will lift off at 1045 EDT (1445 UTC) from Cape Canaveral in Florida on an Atlas V rocket operated by the United Launch Alliance. Assuming the Russian rocket engines do their job the spacecraft will be in low-Earth orbit and free to manoeuver around the globe around 20 minutes later.

According to the published manifest the X-37B will be carrying a new form of Hall ion-powered thruster, ten CubeSats, a satellite containing a TCP/IP web server, test equipment for plasma thrusters, and a device to control low-orbital vehicles, among other gizmos.

The ion thruster being carried aboard the X-37B is owned by the Air Force Research Laboratory (AFRL) and is a new, hopefully more efficient version of a drive system that uses electrical fields to accelerate ions for thrust. An older model is currently in use on three military communications satellites.

"Space is so vitally important to everything we do," said Major General Tom Masiello, AFRL commander. "A more efficient on-orbit thruster capability is huge. Less fuel burn lowers the cost to get up there, plus it enhances spacecraft operational flexibility, survivability and longevity."

There's no word on how long testing will take, but it's not really an issue for the X-37B – the spacecraft already holds the longevity record for a reusable spacecraft with a 674-day sojourn that ended last year. That's a lot of testing time and it's likely there's more in the X-37B's holds than the Air Force is letting on.

The wind from the Sun

Also hitching a ride on the ULA rocket are ten CubeSats, each ten centimeters per side, including one special satellite courtesy of the non-profit Planetary Society. Engineers there have built a solar sail, dubbed LightSail, into the tiny payload compartment and will use it as a testbed for a solar sailing mission to the stars.

Once free of the Atlas rocket the LightSail will deploy booms and raise four triangular sails, each just 4.5 microns thick, to give a shiny surface area that will make it shine bright enough to be visible from Earth. 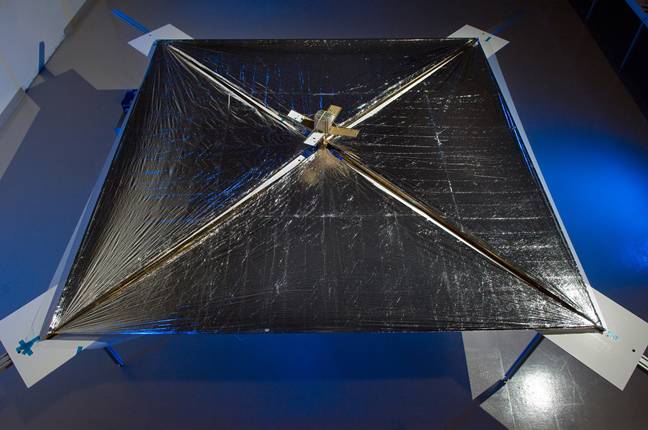 Arthur C. Clarke would be proud

This launch is a test flight intended to test the sail's deployment and the satellite's radio links with Earth. The LightSail itself won't be big enough pick up enough solar photons for serious sailing at this stage.

But bigger things are in the pipeline: in 2016 the Planetary Society hopes to deploy a larger version with 32 square meters of sail and a controller that will be able to fly at least to the Moon and back using nothing more than photons from the Sun.

Earlier this month the group launched a Kickstarter campaign to raise the necessary $200,000 for the launch. So far it has raised nearly three times that figure, and will use the extra cash to fund four more months of LightSail's operations and organize programs for future launches.

As for the other CubeSat's there's a CIA-funded satellite containing a TCP/IP web server that will be testing out orbital data networking, Naval Academy hardware for testing out miniature plasma thrusters, and a larger AFRL device intended to control lob-orbital vehicles.

The information about what is actually in the X-37B is unusual for the Air Force. Thanks to the internet, the space plane's existence is not exactly secret but the information does seem aimed at calming fears that the US military may be weaponizing space.

Since the spacecraft's first flight concerns have been raised about what it's doing up there, and now we at least know a few details. ®