X-37B up and in orbit. Let a thousand solar sails bloom 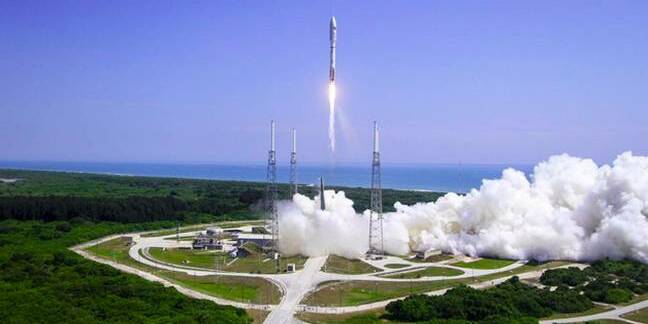 The US Air Force's not-so-secret space plane, the X37-B, has been successfully launched into low-Earth orbit along with an array of interesting test products.

The rocket lifted off, after a 20 minute delay, at 1105 EDT (1505 UTC) from Cape Canaveral, Florida on Wednesday and delivered the space plane into orbit with its secondary booster. Attached to the underside of the United Launch Alliance's booster was the secondary payload, ten CubeSats sponsored by the US military and NASA.

"ULA is honored to launch this unique spacecraft for the U.S Air Force. Congratulations to the Air Force and all of our mission partners on today's successful launch!" said Jim Sponnick, ULA veep for the Atlas and Delta Programs. "The seamless integration between the Air Force, Boeing, and the entire mission team culminated in today's successful launch of the AFSPC-5 mission."

Not mentioned however was the fact that the mission was using a Russian-engined Atlas V rocket - something that bothers both Congress and Tony Stark wannabe Elon Musk with his SpaceX team.

It's not known how long the X-37B will stay in orbit, but it's capable of extended stays – setting an orbital record for a reusable spacecraft with a 674-day mission last year. This time around it will be testing out a new ion drive for military satellites, as well as carrying out other, unspecified duties.

US space non-profit the Planetary Society was crossing fingers and toes for a successful launch, as the rocket carried the first build of its LightSail orbital platform – a panel of solar sails that use the momentum of photons from the Sun to provide a free drive system.

As soon as the LightSail is clear of the Atlas booster the team will deploy its solar sails and start testing the radio. While the current prototype won’t be harnessing the wind from the Sun just yet it will be visible from Earth when the sails are deployed.

The good performance of the Atlas rocket will have calmed the nerves of some in the space industry, since the safety of the Russian rocket motor it uses has been called into question after recent failures with Russian hardware.

The fact the ULA (a joint venture of Lockheed Martin Corp and Boeing) is still reliant on Russian technology to launch US military hardware has been questioned by some in Congress, with Senator John McCain (R-AZ) complaining that the US was essentially funding Russian companies, despite ongoing sanctions.

ULA has the contract for US military orbital delivery, something SpaceX has been contesting, and Elon's Musketeers actually sued over. The two firms have now settled and it looks as though SpaceX will be getting a slice of some very fatty American military pork.

In the meantime ULA is fighting back with its proposed Vulcan rocket system. The company wants to use a yet-unbuilt engine from Jeff Bezos' space venture Blue Origin to deliver satellites, but will be facing stiff competition from SpaceX.

SpaceX can already undercut ULA on price per launch, and will fly its Falcon Heavy lifter later this year, if all goes to plan. The next LightSail is scheduled to be among its first cargo, and an X-37B launch might not be too far off for SpaceX either. ®

Thousands of researchers sign pledge to not develop lethal AI

Happy Satellite Collision Day! It is 10 years since Russia and Iridium got too close for comfort

Plus: Cygnus freighter to spray more sats across the heavens