Microsoft has released a new build of Windows 10, named 10122, which includes an effort to fix file association hijacking, where a newly installed application becomes the default for opening documents with a particular extension, such as PDF, docx, jpg or MP3.

In Windows 10, neither desktop nor Universal (UAP) apps will be able to show a dialog prompting the user to change default file associations. Instead, users get a prompt when they next open a document of a type handled by a newly installed app.

The prompt defaults to keeping things as they are, whereas previously an application could place itself as the default when prompting the user.

File associations are a common cause of problems for less technical users. There is no perfect solution though, since users still need to know when to change them and when to leave them be.

An issue with Windows 8, for example, is that PDFs open by default in Microsoft’s PDF reader which runs full-screen. Adobe’s PDF reader is better, and the usual advice is to install it and let it grab the file association. Now the user will have to take a further step.

Incidentally, I tried installing Adobe Reader to test the new feature, but on my box it crashes on opening. This may be nothing to do with the API change, but it is possible, illustrating the difficulties facing Microsoft when tweaking how Windows works.

There are several improvements to the Edge browser, though this is still branded as Project Spartan in this build. These include In Private mode, pinning websites to the Start menu and history view.

The Edge engine is also improving, and Microsoft claims that its Chakra JavaScript implementation is 1.6 times faster than Internet Explorer 11 on Apple’s Jet Stream benchmark, and 2.25 times faster than IE 11 on Google’s Octane test, and now outperforms Chrome and Firefox.

On a practical note, the Edge browser is now usable on my test Core i5 Slate, where before it was not; it is more stable as well as better featured.

Microsoft warn though that those with AMD GPUs should NOT install this build, unless they can put up with frequent Edge browser crashes thanks to a driver incompatibility. 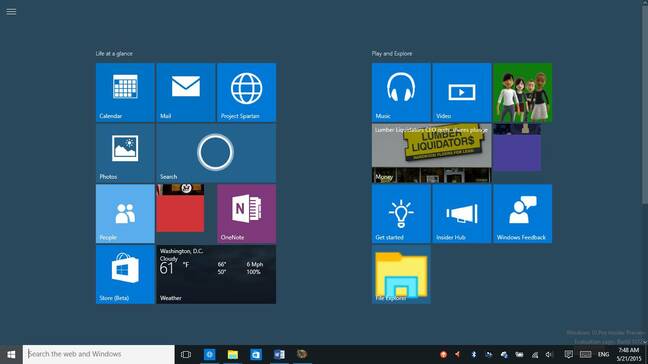 According to the official blog post, the Start Menu and Tablet Mode (which is meant to tweak Windows for use with touch devices) are improved in this build.

If you set the Start menu to full screen, which you can do either separately or by engaging Tablet Mode, you get larger Windows-8 style icons (unfortunate in the case of File Explorer, which has no suitable icon). The list of all apps is hidden by default, but tapping the top-right hamburger menu slides it into view.

This is an improvement for tablet users, but there is still something not right about the interaction between the Start menu and Cortana/Windows Search, especially in Tablet Mode, and I quickly got an ugly screen with a large black strip. 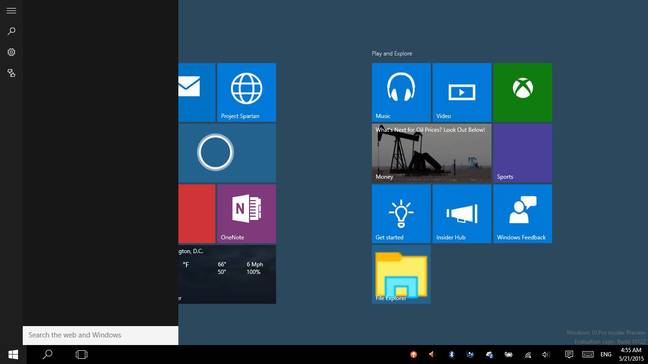 Oops! Something not quite right in Tablet Mode

Another issue is that Tablet Mode still forces desktop apps into full screen, which is not always desirable. This single feature makes Tablet Mode undesirable even on a tablet. Microsoft needs to add an option to work like Windows 8, where Store apps open full screen but desktop apps in a desktop window.

What if you want Windows 10 to behave more like Windows 7? You can disable the search toolbar on the Task Bar, and turn off Cortana, but even setting “Do not search the web or display web results in Search” in Group Policy does not completely disable web search prompts in Start, which looks like a bug.

This can be annoying. Hit Start and type “Control Panel”, and you get a link to the modern Settings app, plus a bunch of web searches for Control Panel. Hit Settings, type Control Panel in the Settings search box, and there it is, taking two searches to get there rather than one. How many users will click a web search in error and get taken who knows where on the internet, instead of the Windows utility they are looking for?

That said, Windows 10 will be similar to Windows 8 in that all the old stuff is still there if you know where to look. Type “System Image Backup” in Start and you get nothing but web searches; but go to File History, and there at bottom left is System Image Backup.

Windows 10 has its annoyances then; but build 10122 does feel smoother and faster than its predecessor so it is gradually coming together.®