The Happiness Industry, Seveneves and Confessions of a Tinderella

Myth and mischief-making in fact and fiction

William Davies is an author whose interest in economic psychology originated during the recent global crash, when he was astonished to discover that behavioural economics and neuroscience were being presented as credible explanations for the financial meltdown.

Mr Davies’ book opens at the economic forum at Davos in 2014, where there is a resident Buddhist monk who has been scientifically measured to be happier than we mere mortals. The forum also features lectures entitled: Rewiring the Brain and Health and Wealth. He concludes: “Happiness has now penetrated the citadel of global economic management.”

We proceed onwards with one of my favourite quotes from the eminently quotable Friedrich Nietzsche: “Man does not strive for happiness, only the Englishman does that.” And so we are taken back a couple of centuries to an Englishman who only strove for “the greatest happiness of the greatest number” – Jeremy Bentham. 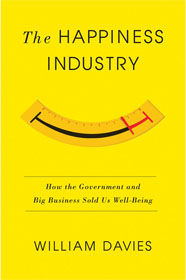 Bentham was not interested in happiness per se, more in its utility, which can be interpreted in any number of ways. The last book I read featuring him was Michel Foucault’s Discipline and Punish, a kind of reverse and perverse high-brow mirror image of happiness if ever there was one.

William Davies observes that money serves two contradictory functions: to serve as a store of value and as a medium of exchange. His background is in economics, but like the best of them, there is a healthy amount of cynicism and black humour in his writing. “Choice” always seems to refer to something which resembles shopping.”

The Happiness Industry is more or less a history of consumerism since the industrial revolution. It contains many pearls of wisdom such as this from Slavoj Žižek: “Enjoyment has become an even greater duty than to obey the rules.”

The book documents the changing relationship between the producer and consumer and how that relationship has been mediated by advertising: “Psychology is very often how societies avoid looking in the mirror.” It contains a few home truths, such as this old chestnut: “Depression is the inability to construct a viable future for oneself.” There are a few dubious inventions, though I was delighted to hear that the Hedonimeter has finally reached the app store.

The Happiness Industry is full of wise words: “The advice is to stop thinking of oneself – but the justification is ultimately a self centred one.” But the conclusion is a clarion call to pessimistic narcissists everywhere, as highlighted here: “The search for the 'objective' reality of our feelings will keep being dashed.”

This book is refreshingly self-helpless. It doesn’t appear aligned to any particular political viewpoint, it is simply the story of our long retreat up our own metaphysical backsides. It is a history of changing attitudes. For instance, the first market research investigators were physically assaulted for being intrusive.

Yet it doesn’t answer that most nonsensical of questions: “How satisfied are you on a scale of one to five?” Nor does it equate happiness with the contents of a shopping list, except in acute and extreme examples. William Davies has nonetheless produced a thought-provoking and interesting little volume which sheds a little light on one of the greatest of modern myths. MD

India to upgrade mobile networks near Maoist insurgents to 4G

Accenture announces 'Accenture Song' – not a tune, but a rebrand