The Happiness Industry, Seveneves and Confessions of a Tinderella

Myth and mischief-making in fact and fiction

Marissa Mayer, or someone with a very similar CV, has become president of the United States. Women's education campaigner Malala Yousafzai, or someone with a more-or-less identical backstory, has become infatuated with her. From the confines of a hastily-contrived orbital habitat, the pair try to safeguard humanity after a cosmic calamity.

Another character might be Jeff Bezos and/or Elon Musk and decides that a private enterprise contribution is needed to secure humanity's future. But a denialist movement questions the motivations of that effort, a well-meaning technocratic class (of whom a Neil deGrasse Tyson analog is a prominent member) can't muster an emotionally-satisfying response and humanity's challenges start to get mighty tasty. 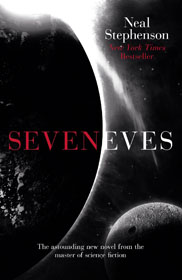 Welcome to Neal Stephenson's Seveneves, a typically sprawling novel from an author in terrific form.

Stephenson always delights in giving geeky readers geeky protagonists to cheer for. Seveneves gives us geeks in space, with the International Space Station (ISS) as their stage and the real prospect of extinction as their motivation. The cast duly employ networked robots, nuclear rocketry and asteroid mining, all explained in pleasing detail, to move things along.

The pace is fast, the detail rich and as readers are asked to contemplate our place in the cosmos we see humanity at its most spiteful, trivial and counter-productive but also at its most resourceful and ingenious. Those competing qualities orbit each other tightly, tied together like some of the space habitats Stephenson devises. The book's contemplative core and high stakes action are also coupled, but uneasily because the book takes a big risk with a manoeuvre through time that I suspect will cause problems for a lot of readers.

The shift also means a change in cast and location. This creates an interesting structure as the story's middle is told in hindsight, which works surprisingly well. Less effective is a conclusion that (not unusually for Stephenson) relies on small, early plot details re-emerging with new weight. Clever backfill and dazzling technologies should keep readers interested even as they grapple with the big changes in style and approach that comes with the story's pivot, but the transition is still awkward.

Stephenson's last novel, REAMDE, was reportedly an attempt at writing a Brainy Airport Novel in order to broaden his appeal. The novel was enjoyable but the terrestrial setting didn't give Stephenson the chance to explore either physics or metaphysics.

Seveneves gets to ponder both, retains its predecessor's impressive pacing, owes a bit to the films Gravity and Armageddon, nods respectfully to Arthur C Clarke and tips its hat to The Time Traveller. Po Bronson might wish he'd penned the satire, Mark Zuckerberg might wonder about the contribution he's making to humanity.

Appreciators of hard science fiction and those who like their satire intertwined with action should find Seveneves to their liking. Those who like their stories linear and neat may be frustrated and delighted in equal measure. Either way, Seveneves is a dangerous thing for northern hemisphere readers to take on holidays: at 850 pages it'll consume your carry-on and it's enough fun that you can forget a tan. SS