"All of the discovered apps were fake in that they did not contain any of the promised functionality and only displayed banners that tried to trick users into believing that their Android system is infected with a 'dangerous virus'," Stefanko says.

"Users were then directed to remove viruses by activating a premium-rate SMS subscription that would cost them €4.80 per week. 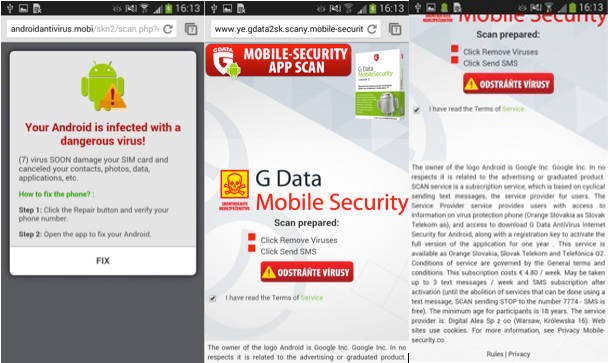 One of the fake apps

The apps craft an SMS which sports text masquerading as an anti-virus activation request. Replying to the message results in the victim signing up to the weekly premium SMS subscription.

Google's Play Store anti-malware Bouncer framework has since 2011 reduced malicious applications by 40 percent. That mechanism is combined with manual review by actual humans to help detect increasingly sneaky malware techniques that attackers use to give Bouncer the slip.

Malicious authors may upload benign and legitimate applications in a bid to accrue users before later pushing malicious updates. These updates are often successful in stinging users who do not pay attention when approving new application permission requests. ®