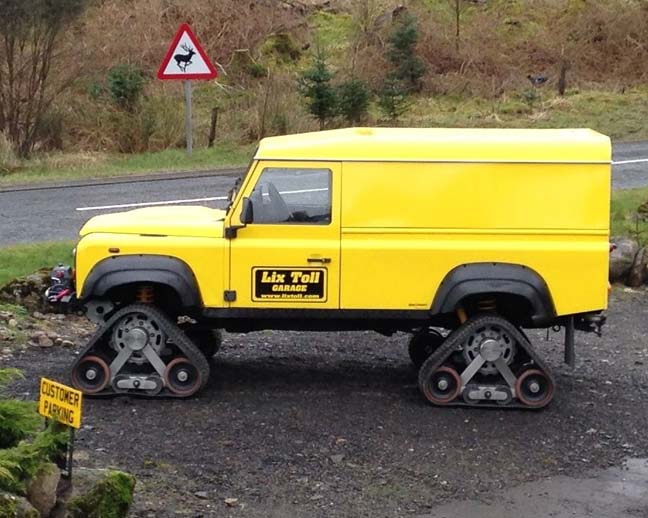 A tracked Defender, for use in snow and boggy areas, at Lix Toll Garage, Perthshire

These names are odd at first glance but they reflect the Land Rover’s engineering origins. 90 and 110 inches are the approximate wheelbase lengths of the two main variants, which are also known generically as short- and long-wheelbase Land Rovers. With the launch of the Land Rover Discovery in 1990, what had simply been the Land Rover became the Defender, which is the current, soon-to-retire model.

One of the greatest strengths of the Land Rover is that it is built on a separate chassis. This design greatly facilitates adaptations of many kinds (as is also true of Mk VI Bentleys) – and Land Rover the company and the Land Rover community at large have never been slow to exploit it.

There are fire engine and crash-tender versions, there are tracked versions, camper vans, ambulances, amphibious versions, versions that run on rails and we even know of one that has been made two inches wider. Why? Because you can. Adding large engines is also a relatively common pastime: for a while one of the authors of this piece owned a magnificent beast with a 4.6 litre V8. There are 130 inch wheelbase variants, three-axle versions – the list goes on and on.

The military community adopted and adapted it too, pressing it into service as an armoured car, the Forward Control 101 (again the wheelbase in inches) to meet the Army’s requirement for a 1 tonne four-wheel drive gun tractor, and many other military types that didn’t proceed beyond a prototype.

The Lightweight, or more officially, the Air Portable Land Rover, with its even-more angular front end, was produced in large numbers for the armed forces as a 4x4 with easily disassembled bodywork to lighten it for air transport. Hilariously, given its name, the modifications made it heavier than the standard version: perhaps it too should have had a number for its name. 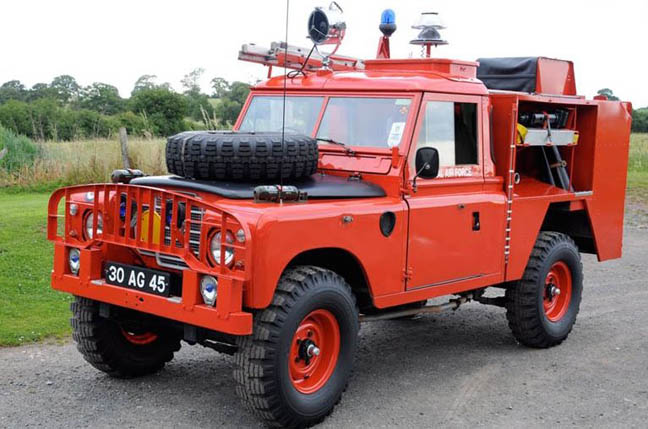 Service in many fields: a TACR-1, owned by Paul

Bringing us up to date are the three run-out editions.

One is the hideously pricey Autobiography version, with a slightly tweaked engine, leather interior, sundry gewgaws and two-tone paintwork: the base price for a Defender is around £23,000, while the Autobiography weighs in at an eye-watering £62,000. Only 100 Autobiographies will be sold in the UK.

Next it’s the much more cost-effective Adventure, with underbody protection and extra-butch tyres (600 for the UK). Last, but certainly not least, is the Heritage (400 for the UK). This is a nod to the Land Rover’s origins and specifically to the still-surviving first production Land Rover, HUE 166 – known as Huey.

In a fetching period pale green, the Heritage has painted steel wheels, a grill with echoes of those of the Series Land Rovers and HUE’s number on the side. It’s cute, very cute.

The run-outs were announced in January and will be built well before the December deadline. In addition to these, JLR will produce a final version called the Landmark that features a Black Pack, leather interior and more. ®