The Low Orbit Helium Assisted Navigator (LOHAN) team is gearing up for one final test flight, codenamed PRATCHETT in honour of the late and great Discworld author Sir Terry.

Reg reader Alex Carlton conjured up the winning name, and won himself a RockBLOCK Mk2 Iridium satellite comms unit from our mates at Rock Seven.

Alex described himself as "chuffed to bits" with his prize, especially since he's involved in some kind of rockoon project which will require the services of just such a bit of kit.

Good show. Back at our own epic ballocket saga, the PRATCHETT mission will be conducted by our US allies at Edge Research Laboratory, who last October sent up a Vulture 2 avionics package and put together a nice video of the textbook High Altitude Ballooing (HAB) mission:

The purpose of dispatching an avionics package to 27,700 metres above Colorado was to determine how the kit would handle the cold, especially the batteries, servos and digital airspeed sensor.

Here's a schematic of the Vulture 2's current set-up, featuring the Pixhawk autopilot and a whole load of extra batteries, after initial ground tests showed a measly four AAs just weren't going to cut it. 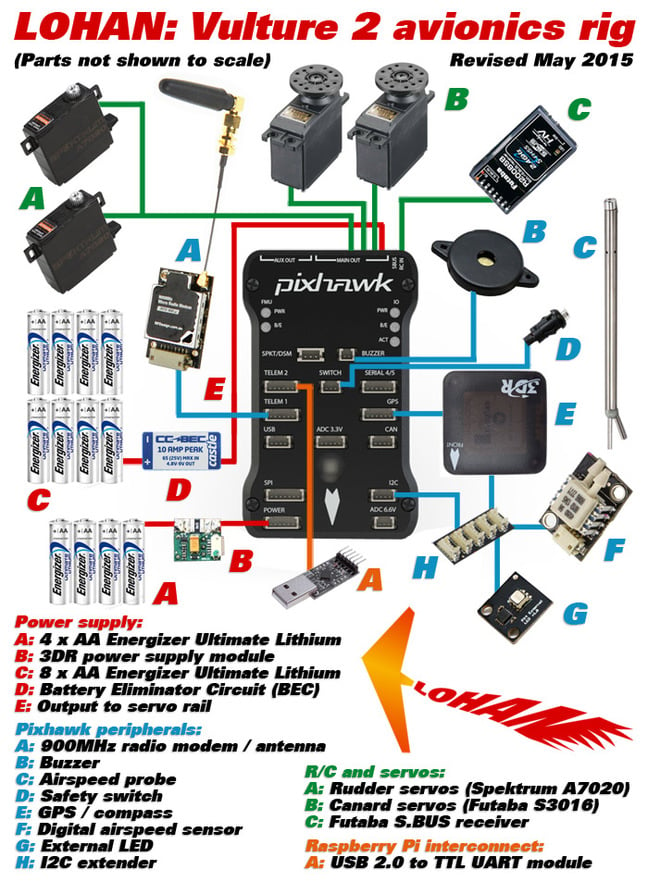 For the initial test flight, the Pixhawk was running the custom MAV_CMD_NAV_ASCEND_WAIT command (more on our bespoke parameters here), which wiggles the servos every 15 seconds to prevent them freezing on the ascent to Vulture 2 launch altitude.

Here's the kit in its payload box, with the digital airspeed sensor mounted outside: 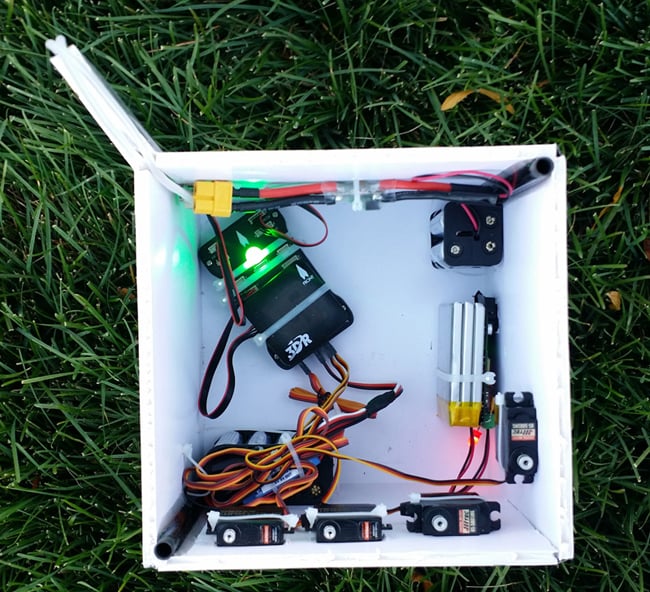 Outwardly, it appeared the avionics survived the ordeal in fine fettle, but once autopilot brain surgeons Andrew Tridgell and Linus Penzlien had picked over the flight logs, there were a few issues which needed addressing, the details of which you can find here.

Since the batteries — and their ability to adequately power the entire mission — have been giving everyone sleepless nights, we're happy to give them another blast. Suffice it to say, we do have a back-up power plan should they prove inadequate.

PRATCHETT would, then, be a simple re-run, were it not for the presence of the 900MHz ultra long range radio rig, which wasn't available back in October.

With this hooked up to the Pixhawk, the avionics will be in their (hopefully) final configuration, as already mounted in the Vulture 2. Audaciously, this new radio capability should provide Tridge with a live feed from the Pixhawk during the flight, enabling some monitoring and possible on-the-fly tuning from his sofa in Australia. Earlier this year, he demonstrated a similar remote hook-up at the linux.conf.au in new Zealand.

Tridge and Edge's David Patterson have already tested the system on the ground, and report it's working well.

Before PRATCHETT, David hopes to get the avionics rig to the top of Pike's Peak, to check radio reception at Edge's launch base at Colorado Springs East Airport, some 50km to the east.

That done, PRATCHETT should be in the air within three weeks or so, weather and team availability permitting. We invite readers to raise the traditional glass or two to Edge and Tridge for their sterling efforts. ®