Pavegen: The Company that can't make energy out of crowds tries to make money out of them

And uses data harvesting to shoot itself in the, er, foot

But what about about all the Big Footfall Data? You could find out all KINDS of stuff from that! (Such as, there's nobody in our offices any more)

Still, it's pretty plain that Sir George isn't going so far as to actually spend any of his shareholders' money on Pavegen. If he was, Kemball-Cook wouldn't be rattling his tin on crowdbegging site Crowdcube - which he is. And his associated publicity effort has sucked in not just The Engineer but - perhaps less surprisingly - TechCrunch, which describes the pointless Pavegen tiles as "a high tech flooring product that can generate enough energy to power lights and even buildings by harnessing kinetic energy from pedestrians".

The wide-eyed tech site adds that "there is, after all, no shortage of footfall" (just a shortage of energy from footfall).

"Laurence has managed to grow the company to a 30-st[r]ong team of engineers, designers, and innovators," gushes the Pavegen press release (actually mainly just designers and "innovators" it would seem, though there are nowadays a couple of people with actual engineering degrees).

They'd have to be pretty mad to do that just on the energy argument, and perhaps Kemball-Cook has finally realised that. In the way of many startups, he's now trying to do something quite different from what he started out doing: Pavegen now also touts its tiles as a trendy Big Data / Internet-o-Stuff idea, harvesting information from your footsteps for people to crunch.

“We can actually tell a retailer in real-time that everyone walking in is going left… and how people are moving in different places," he enthuses to TechCrunch. 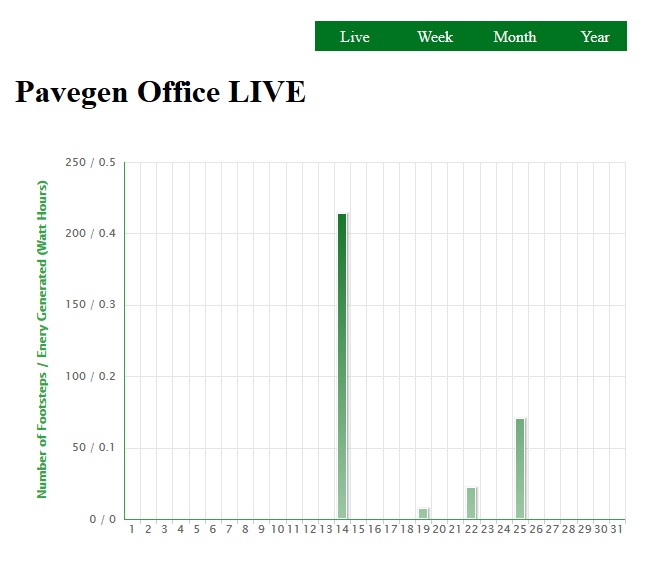 Not that 'lively' really.

That's evidently true. But the thing is about this kind of information is that it doesn't always help. A case in point would seem to be provided by Pavegen's example data-harvesting installation in its own "lively" London offices, which would seem to reveal that the thirty staff haven't bothered to go to work very much lately (there were recorded footfalls on just four days this month). If footfalls are any indication, hardly anyone's been in there this year, actually, and really - looking at the yearly graph - it seems as though Mr Kemball-Cook may already have had to let a lot of his innovators go. 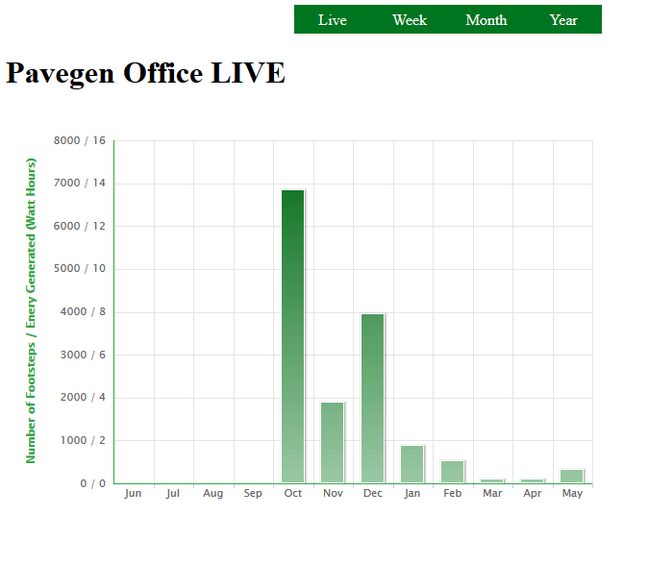 This company is growing its staff?

That may not be the case at all, of course; we may have got that completely wrong. But if that's not true ... maybe the data you get from electric floor tiles is about as much use as the energy.

Still, what do we know? The giant finance brains of the internet have already, as this is written, coughed up nearly half the money Kemball-Cook was crowdbegging for, accepting his paper as though his foolish (and far from new) idea is worth seventeen million pounds.

Even so, the Register finance desk has no hesitation in awarding this equity a solid "bumwad from the Bank of Toyland" rating. ®