A nod's as good as a wink to a blind bat

A presentation given at a conference on high-performance computing (HPC) in Poland earlier this month appears to have yielded new insight into Intel's Xeon server chip roadmap.

A set of slides spotted by our sister site The Platform indicates that Chipzilla is moving toward a new server platform called "Purley" that will debut in 2017 or later.

The slides, which were presented at the Konferencji Użytkowników KDM conference, describe Purley as the "biggest platform advancement since Nehalem," a reference to the microarchitecture that Intel debuted in 2008 with the release of the original desktop Core i7.

Central to Purley will be Xeon chips based on Intel's forthcoming "Skylake" architecture, which is the planned follow-up to the current-generation "Broadwell" chips.

Like Broadwell, Skylake chips will be fabbed using Intel's 14-nanometer process, only they are expected to deliver greater performance per watt and higher memory bandwidth than their predecessors. 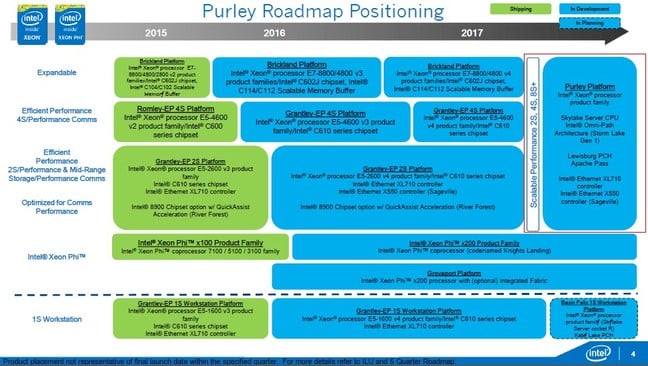 Intel's got big plans for "Purley" (click to enlarge)

The Skylake Xeons will also have either 10Gb/sec Ethernet or 100Gb/sec Omni-Path fabrics integrated on their dies, according to the slides.

Even more intriguing, Intel promises an "all new memory architecture" that delivers persistent data at four times the capacity of DRAM but at lower cost and 500 times the speed of NAND flash.

As with the current Xeons, Intel plans to deliver versions of the Skylake chips with various integrated accelerators, including encryption and compression coprocessors, field-programmable gate arrays (FPGAs), and graphics and media transcoders.

Variants of the chips will be custom-tailored for HPC, enterprise, cloud, storage, and networking workloads, we are told.

Even farther down the road, a refresh of Skylake called "Cannonlake" is expected to shrink the die down to 10nm, but that could be well into 2017 or even later, as far as we can tell. The slides present Intel's roadmap in broad terms and the chipmaker hasn't committed to any release dates so far, so take all of this with however much sodium chloride you deem prudent.

Before any of this Skylake stuff appears, we can also expect to see Broadwell-based Xeon processors, including Broadwell-EP chips for two-socket systems and Broadwell-EX versions for four sockets and larger.

There's plenty to chew on here, and if you'd like to dive deeper and see more of the slides, head on over to our colleagues at The Platform for more. ®