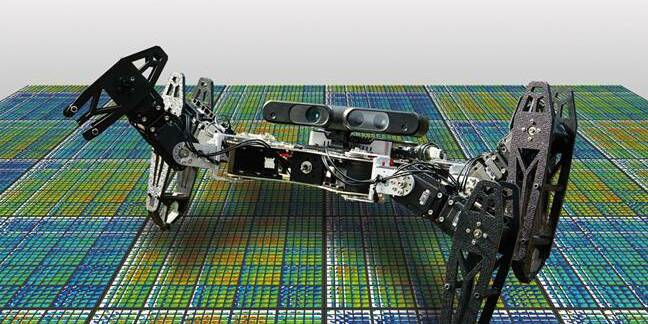 If you're the future mother of a resistance leader who's destined to save the world from killer mechanoids then life just got a little tougher. Scientists have developed software that allows robots to work around injuries in minutes and carry on their assigned tasks.

The research, published in the journal Nature, is a collaboration between French and American scientists intended to solve a major problem in robotics. While machines are very good at following orders, they don’t deal well with the unexpected. If damaged, they can make the problems worse by ignoring the problem.

To solve this issue, the scientists took their inspiration form the natural world. They wrote software that allows the damaged robot to assess its capabilities, try new movement tactics, and work out the best solution for carrying on, all within a few minutes.

"Once damaged, the robot becomes like a scientist," explained lead author Antoine Cully. "It has prior expectations about different behaviors that might work, and begins testing them. However, these predictions come from the simulated, undamaged robot. It has to find out which of them work, not only in reality, but given the damage."

"Each behavior it tries is like an experiment and, if one behavior doesn't work, the robot is smart enough to rule out that entire type of behavior and try a new type," Cully said.

"For example, if walking, mostly on its hind legs, does not work well, it will next try walking mostly on its front legs. What's surprising is how quickly it can learn a new way to walk. It's amazing to watch a robot go from crippled and flailing around to efficiently limping away in about two minutes."

The team is confident that the same software can be applied across a wide range of robot models, allowing them to cope with mechanical problems until they can be fixed, rather than shutting down or carrying on failing in their tasks repetitively.

"It could enable the creation of robots that can help rescuers without requiring their continuous attention," said coauthor Danesh Tarapore. "It also makes easier the creation of personal robotic assistants that can continue to be helpful even when a part is broken." ®

Robot lands a 737 by hand, on a dare from DARPA