NASA has announced the nine instruments selected for its planned 2020s mission to Jovian moon Europa, and as is the local custom, there are some choice stretching-it-a-bit acronyms on offer for aficionados of the agency's previous efforts.

Those previous efforts include the memorable "MErcury Surface, Space ENvironment, GEochemistry, and Ranging", aka "MESSENGER" to its mates.

So, the "Interior Characterization of Europa using Magnetometry" (ICEMAG) instrument will "infer the location, thickness and salinity of Europa’s subsurface ocean using multi-frequency electromagnetic sounding", while "Radar for Europa Assessment and Sounding: Ocean to Near-surface" (REASON) will do pretty much what it says on the tin, viz: "Characterize and sound Europa's icy crust from the near-surface to the ocean, revealing the hidden structure of Europa’s ice shell and potential water within."

Still, the truly sensational "SPace Environmental and Composition Investigation near the Europan Surface" (SPECIES) instrument, while not making the final cut for the trip, has been selected for "further technology development" and possible deployment on another mission, which may or may not involve Natasha Henstridge.

John Grunsfeld, associate administrator for NASA’s Science Mission Directorate, said: "Europa has tantalized us with its enigmatic icy surface and evidence of a vast ocean, following the amazing data from 11 flybys of the Galileo spacecraft over a decade ago and recent Hubble observations suggesting plumes of water shooting out from the moon.

"We're excited about the potential of this new mission and these instruments to unravel the mysteries of Europa in our quest to find evidence of life beyond Earth." 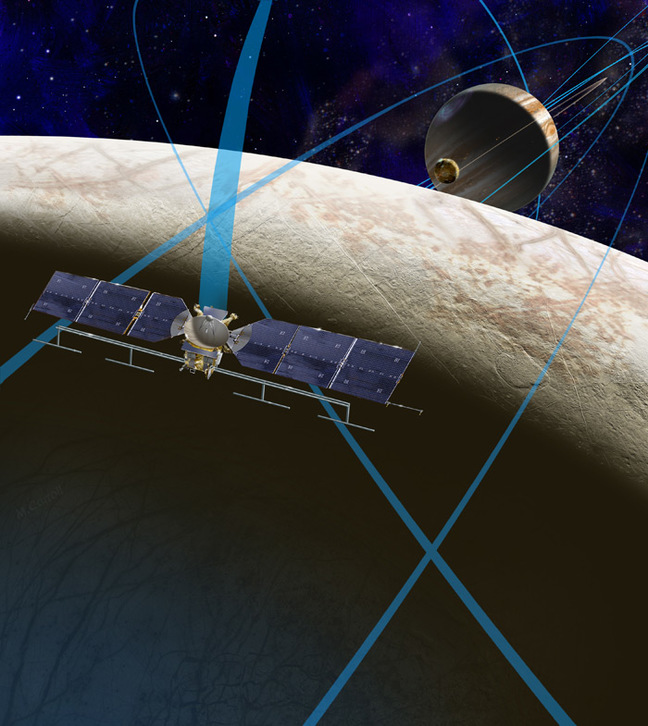 PIMS, ICEMAG and REASON will travel to Europa aboard a solar-powered spacecraft performing "a long, looping orbit around the gas giant Jupiter to perform repeated close flybys of Europa over a three-year period".