Do health trackers really keep you in good shape?

The quantified self is, of course, all about the self. While lots of trackers let you record your own personal data, and some allow you share it with other people online to compare performance, they’re not generally part of a large scale scientific project.

For the last week, I’ve been wearing one that is. It’s certainly not the most glamorous looking of gadgets and there’s no display at all. I’m part of a project called UK Biobank, which recruited a half a million people between 2006 and 2010. 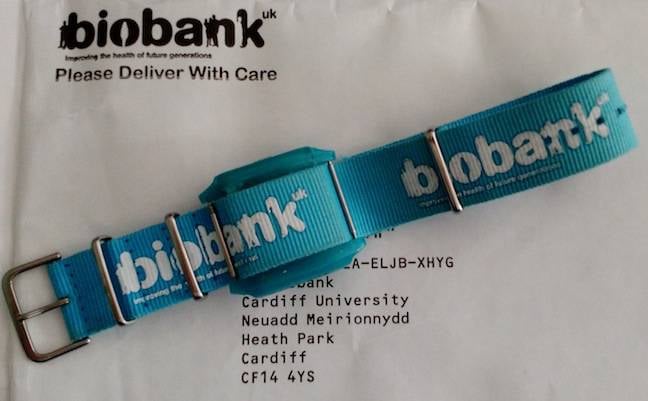 Wear and return: Biobank is monitoring half a million people

Biobank volunteers, all over 40 at the start of the project, have provided samples, and been tested, to help build up a detailed picture of a population as it starts to age. The intention is to provide lots of information that can be used to help prevent and diagnose a range of diseases. With so many participants, there’s a lot more scope for spotting patterns and trends that might not otherwise be apparent. Already, for example, work using Biobank data has shown that being active in middle age may cut the risk of breast cancer, and helped revise recommended BMIs (Body Mass Index) for different groups of people.

The Biobank monitor is a pretty simple looking gadget, around the size of a small wristwatch. Mine arrived last week, with instruction to wear it on my writing wrist until the morning of the 27th May. After that, it’s time to pop it back in the jiffy bag provided, and return it to the researchers. There’s no display or anything to distract you from going about your daily business. It measures movement in three axes for a week – there’s no heart rate or other monitoring. The device has a unique ID which allows it to be linked to my Biobank user information when it’s returned, before it’s wiped clean and then sent out to another person.

Biobank is aiming to capture activity from 100,000 of their participants

Personally, when it comes to fitness, I’m often a little lacking when it comes to motivation. My doctor asked me once about exercise and when I told him I’d been to the gym in 1987 he remarked that there was clearly nothing wrong with my memory. While I probably wouldn’t bother with a tracker based on the idea of the quantified self, I do actually like the idea of wearing this one, for the greater good.

I wonder too, how many Reg readers would find it more satisfying to use trackers, smart watches, and other similar devices if they knew that, rather than simply competing in a score table on a web site, they were quietly adding to the sum of human knowledge along the way?

And even if you could, would you trust the companies making those gadgets to treat your personal data with the same care as the medical professionals at Biobank? Would it even be possible for such devices to contribute to research, without being tangled up in regulatory red tape, as Apple feared? ®