Water way to fight a war

Kitting out with various types of headgear, tops and shoes is another way of augmenting both the 'freshness' of your character's style (something the game's obsessed with) and special abilities for your bespoke Inkling. These might include anything from running faster, to being able to jump to teammate's without leaving a marker. 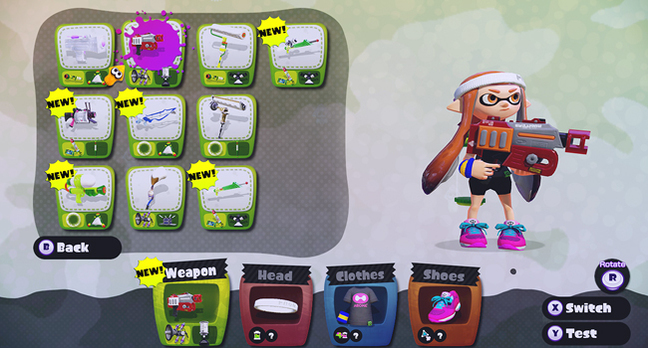 Get your kit on

All of these abilities won't elevate any given player to such lofty heights that newcomers won't be able to compete. However, they might just tip the balance in a tight game, meaning it’s worth earning cash to upgrade your kit.

The arenas of battle are small but perfectly formed, even if the option to only ever have two maps available (which rotate every four hours) is a strange design choice. However, the giant squid in the room is the lack of game modes beyond the already mentioned Turf War and Splat Zone. This second option – unlocked at level 10 and designed around holding inked areas – is fantastic fun too, but only serves to leave you wanting more. 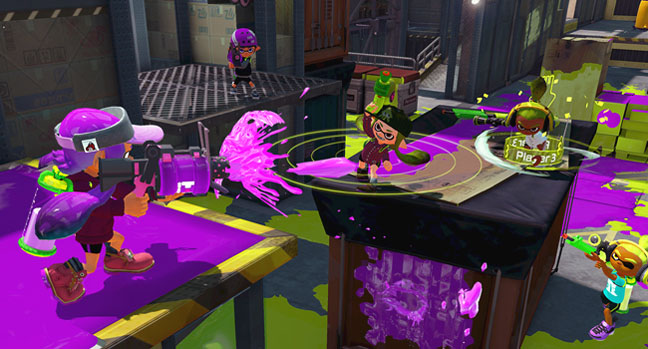 At least the game appears to be mercifully free of connection issues online. Players dropping midway through a match is a rarity and this (hopefully) points to solid net code. Things do fall down slightly when it comes to the game's lobby system, though. Waiting for a game is fine – there's even Squid Jump, a NES-style mini-game to play as you wait – but there’s no back option. The only way to back-out of a lobby is to wait for the lobby timer to reach zero or restart the game entirely.

Annoyingly, there's also no option to re-equip your character from within a lobby which is baffling and needs to be fixed, while the matchmaking option that’s promised for August can’t come soon enough. The lack of voice communication is also an oddity and due to Nintendo being unwilling to subject its fans to the potential for F-bombs, apparently. F-ing typical ... 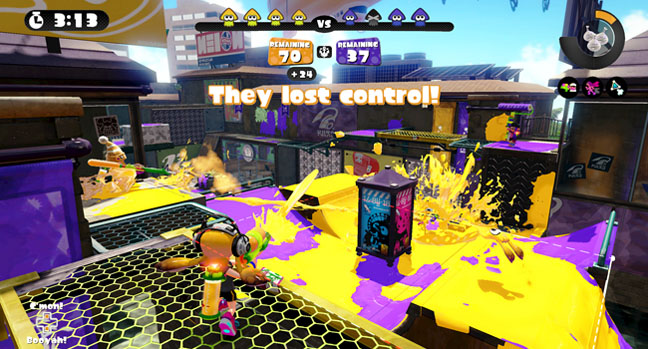 On to Splatoon’s single player component then, something that while not exactly epic is charming in its own limited way. It plays rather like Mario Galaxy but without the expertly crafted platforming element – Mario's leaping largely replaced with navigating in your squid form.

As with any Nintendo single player experience, there are smatterings of genius, particularly when it comes to working out a path through the verticality of the some of the game’s stages.

However, on the whole, it's a little short-lived, slightly repetitious and certainly not up to the level of a Mario or Donkey Kong adventure. That said, for those who do buy Splatoon, the campaign is worth playing in order to unlock extra multiplayer weapons by finding the hidden scrolls scattered throughout its stages. 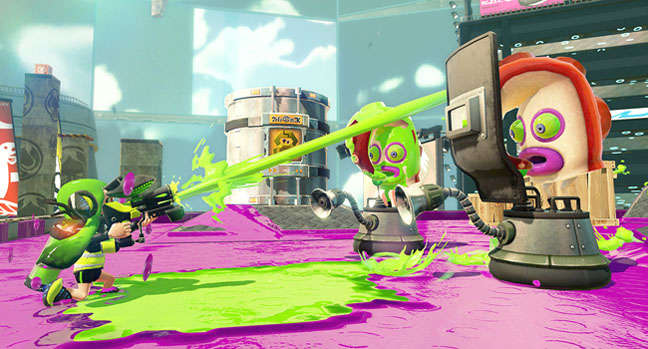 I want to say I love Splatoon, and I do – it’s an incredibly entertaining and fun alternative to the bloated genre that is the online shooter. However, for a game whose characters are obsessed with ‘staying fresh’ there’s already an aroma of rotting fish in the air.

Both Turf War and Splat Zones are excellent but they’re the end of the story as far as current modes of play. Whether the game has a shelf life is entirely in the hands of Nintendo but, as it stands, there’s just not enough here for it to be a must – at least for non-Wii U owners.

Quickly add more ways to play and a better lobby system, however, and even a few PS4 and Xbox One owners might come to see what all the was fuss about. The ball’s in your court Nintendo. ®