White Hat/Black Hat, where have the writers gone?

Recap The first season of HBO's sharp, satirical Silicon Valley had just eight episodes. By the measure of last night's show, they should have stuck to that for season two rather than try to punch in an extra two episodes.

White Hat/Black Hat felt like the episode pulled together from rejected ideas. And there weren't that many, so we were treated to several of them twice. The sharpness was also gone (have the tech writers taken a sabbatical?), leaving some shameful plot devices that making no technical sense.

And as if to confirm that this episode was as unstable as Pied Piper's own compression software, the producers resorted to pointless swearing in the hope no one would notice there weren't enough actual gags. When you reach for the fuck-gun, you know you're not firing on all cylinders.

The acting is still good, though: Thomas Middleditch continues to mine a rich seam of comic potential as Richard: failing miserably to down a shot of tequila; doing so again when he decides to give a pep talk to his team; standing up to their ludicrous financial backer Marc Cuban Russ Hannemann...

Richard: You're not our money guy.
Russ: Since when?
Richard: Since you stopped giving us money, asshole

…and then feeling crushed when Russ plays to the heartstrings, before being, you know, just as much as an asshole as Richard called him out on.

There were also some great lines.

Gilfoyle: He's not going to do shit. He's a coder.
Dinesh: By definition, we're all pussies.
Gilfoyle: He'll vent for half an hour. Then he'll go larping and mogging and stroke his dick for a while.

On smoking and China.

Erlich: Jian-Yang, what are you doing? This is Palo Alto. These people are lunatics about smoking here. We don't enjoy all the freedoms that you have in China.

In fact, Erlich (T.J. Miller) gets and delivers all the best lines, and is rapidly becoming the best character in the whole show: savvy yet blinkered, idiotic and brilliant, ideological and utterly shallow at the same time.

But before we get to the shameful tech tragedies, here's what happened in terms of plot:

But let's take a look at Smokation. The basis of the software is, we are told, a "geotagging technology that will locate uncrowded playgrounds." The idea is that parents will be able to find playgrounds with few kids. Something that is also useful for pedophiles, it is pointed out, would could provide "some marketing pain-points."

You can see how this would work, in theory. Parents download the app in order to find non-crowded playgrounds. That app provides your location. The app can then figure out where parents are and put them on a map. Simple and wonderfully useless: perfect fodder for Silicon Valley. (There are actually apps out there just for finding playgrounds, in case you were wondering.)

But how does that then translate to Smokation? In this case, the location of the people who would benefit most from the app (non-smokers) is not useful; they want location information on people who would derive little benefit from installing the app (smokers). It wouldn't work. This messy thinking is unsurprisingly lazy for a show that has shone by being acutely observed and largely smart in its logic, if tweaked for comic effect. 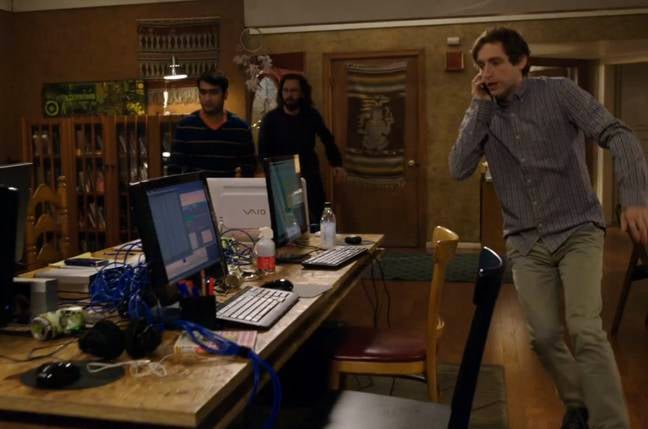 We've run out of gags?! Quick throw our tech credentials out the window and say the word 'cocksucker'