GameFly will let you play top games for $7 a month 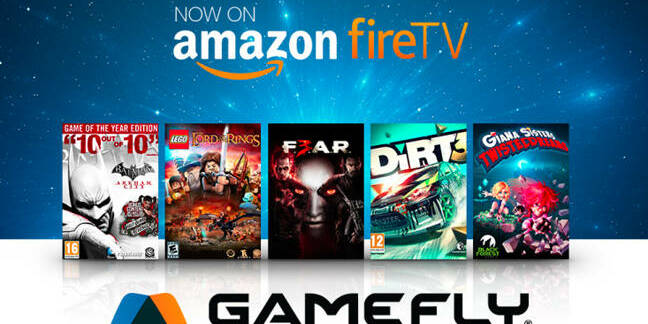 Amazon is hoping to crack the streaming media market with a new gaming app that lets you play many of the latest titles for $6.99 a month.

GameFly Streaming is available today as an app on the retail giant's Fire TV and lets you rent bundles of games at a time. For example, the "Action Pack" contains seven titles including F.E.A.R. 3, Operation Flashpoint: Dragon Rising and Red Faction: Armageddon. The "Gamer Pack" has 16 titles for $9.99 a month.

GameFly also officially bought the company whose technology the games run on - Israeli cloud gaming company Playcast - on Tuesday. Playcast has been rolling out slowly across a range of devices, such as Android gaming system Ouya. In February, it announced it would be available on some new Samsung TVs.

A streaming gaming service on the FireTV could see Amazon pick up new customers since the nearest any of its rivals have to gaming is a service that lets you stream your existing games on your PC through your media box. Roku does have some games on its box but they are basic and none of the big names are included.

Likewise, the deal with Amazon is good from GameFly's point of view as it can potentially gain access to millions of new customers. To get that deal though, GameFly has been pulled into the Amazon eco-system: you will need both a FireTV and an Amazon account to access the service, as well as a Xbox-compatible controller.

It's not clear if the company has signed an exclusive arrangement with Amazon, as HBO did with Apple over its HBO Now service, which let you get access to HBO for a monthly fee but without a cable subscription.

In terms of numbers of games available, GameFly is currently behind rivals. It has 35 games whereas Nvidia's Grid has around 50 and PlayStation Now around 120. That may change, especially if the service is a success; the company says it is in talks with EA, Ubisoft, Konami and Disney to license their software.

GameFly may also work out cheaper than its rivals: you can only buy games from Nvidia Grid and the service doesn't include the big names; PlayStation Now's package is either $19.99 a month for access to all games or $6.99 a week for one.

With Roku having recently launched an updated Roku 3 and expected to launch Roku 4 later this year, and with Apple expected to launch an Apple TV 4th generation next week at its WWDC conference, Amazon needs to do something significant to stay in the game. It could well be that streaming games is the killer app that gives it the boost it needs. ®