Half a billion for BLOODY BIG telescope in Chile

Giant Magellan 'scope a 'venture into the unknown'

The planned largest optical telescope in the world, the Giant Magellan Telescope looks to go ahead, with its consortium signing off on the US$500 million build cost.

The telescope is ambitious engineering: seven mirrors spanning a total of 25 metres, which the project says will focus “six times” the amount of light collected by today's biggest optical telescopes.

If all goes to plan, first light should be seen by three or four primary mirrors in 2021, and all seven mirrors should be in place by 2024.

Even at first light, GMT director Pat McCarthy told the BBC, the instrument will be the world's largest optical telescope "by a good margin".

The idea is to look back at the first winks of light emitted in the ancient universe, just after the Big Bang, an epoch that today is best understood through radio and X-ray 'scopes as well as Hubble.

As Nobel-prizewinning astronomer and chair of Astronomy Australia Brian Schmidt told the Australian Broadcasting Corporation, the 'scope will be harbinger of a “new era of discoveries”. 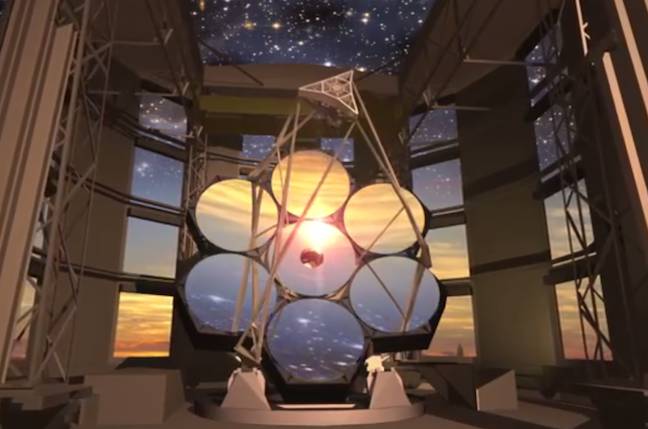 Adaptive optics for the telescope are being developed at the Australian National University, whose professor Matthew Colless said the designs will mean “we can see smaller things, further away than ever before”, capturing objects ten times smaller and fainter than Hubble can manage.

The optics will use lasers and rapidly-deformable mirrors to cancel out atmospheric distortion, Colless said.

The $500 million now signed off is half of the total billion-dollar budget for the instrument, which will be built at the Las Campanas Observatory in Chile.

The Giant Magellan Telescope's description says it will have “six off-axis 8.4 meter or 27-foot segments surround a central on-axis segment, forming a single optical surface 24.5 meters, or 80 feet, in diameter with a total collecting area of 368 square meters”.

The GMT's competitors when it's completed will be the European Extremely Large Telescope (also to be built in Chile), and the Thirty Meter Telescope (TMT) planned - but currently stalled by controversy - for Hawaii.

The TMT is subject of protests from native Hawaiians, who consider its Manua Kea volcano site to be sacred land.

While not as big as the TMT, the GMT's designers think with fewer panes of glass, they'll have an edge in some of their observations, because GMT image processing won't have to deal with as many phase-shifts between different mirrors, Dr McCarthy told the Beeb.